As the only surviving member of the Peoples Democratic Party (PDP) in the All Progressives Congress (APC)-dominated Lagos State House of Assembly, Hon. Oladipupo Olorunrinu does not feel intimidated.

The lawmaker, representing Amuwo Odofin Constituency 1 in the House, reiterated the fact that he would continue to be in the opposition and that he has no reason to cause crisis in the House.

He speaks on other matters of interest in this interview he granted Oladipupo Awojobi.

Being the only PDP member in the house, does it mean you are satisfied  with every deliberation in the house or you are just afraid to speak?

When I was oming to the Lagos Assembly, I came in as a minority. I can’t be afraid of anybody. Like you said, it is just a matter of 39 against 1. I might not be satisfied with everything they say, but the most important is that the majority of the party is there. The Majority of the people are accepting. As you have rightly said 39 against one and it doesn’t also mean that I am not happy with what they also do, you understand. But the important thing is that the majority of the representative have keyed into it, so we just work with the people we are standing in for. What we stand in for in the Assembly as an institution is for the people. So, its like one person coming to say it should be like this against every other person. It does not mean that I don’t have my personal opinion and it does not also mean that I would say yes because every other person is saying ye. But it is just a matter of give and take thing. We can’t all get it right and we can’t all have it right.

No matter the situation, you are still not part of the majority. What has the experience been like and have you been sidelined in any area?

Let me say this and make it clear. In the Lagos State House of Assembly, you don’t come here to do political party, in as much as you can’t do away with it in some angles. Everybody has where they all came out from. But the important thing is that Lagos is a state where its people are highly expectant of what are here for.

On the issue of sideline, I have never been sidelined. The Governor himself has to govern the whole state. So, it is the interest of the Governor and the Executive that it also gets to the minority areas, where the minority parties are. It doesn’t mean that he won’t because the fact that it is the PDP that wins in my area now does not mean the Governor won’t work there. He will and as you can see, he is. He is Governor for everybody.

What has been you driving force as the only surviving PDP member in the assembly?

In the most sincere truth, my driving force has been the majority that sent me here. Some people sent me here, some people sent everybody here. In my area, the majority that sent me here is the PDP. They keep me going. And even the opposition party, APC keeps me going. I have a relationship with every party- Labour, APGA, APC, PDP.  Once you win an election, you should have an administration for the entire people. You can go and do your fundings, regardless of everybody’s motion about party, it is a laid down constitution to have a formidable administration.

Have you ever been tempted to defect to the APC like your other colleagues?

When you say tempted, tempted has to do with choice.  Something must attract you. Tempted has an undertone of attraction . Well, nobody wants to be in a lonely place, but you must also look at the reason and what you come to do in that place. Most times, I try to remember that some people sent me here and I look back and said that they are not really in line with that temptation. So, it makes you respect yourself by aligning with the people that sent you to work here.

Don’t you see the achievements of Governor Ambode as a kind of publicity for APC members. Perhaps, the reason that propelled the defection of your colleagues from PDP to APC?

One man’s meat is another man’s poison. My colleagues might have seen that. But like I said, Governor Ambode is a very intelligent and hardworking man. As you can see, the Governor is working and who will see something good and would not reckon with it. And he is working because I am working. He is working because the legislative arm of government is working. It is a synergized government. There is nothing Governor Ambode is doing that does not pass through the legislative arm. So, saying that Governor Ambode has not worked is like saying the legislative arm has not worked. It is like saying Dipo Olorunninu has not worked. For me, I think we should get more practical with administration and keep it real since we are using the American system of democracy. For instance, if the Republican wins, while the Democrats did not, they still work together after election. It does not mean he is trying to cross-carpet.

How would you describe the Lagos political system?

It is a system where you have people that are highly intelligent and it is a sort of competitive approach in politicking. It is a system, where people from different kinds of orientation, idea, styles of life, styles of governance  have to come together to make a meaning. For me, it is a politics where you just crave your own layout.

Just recently, the President of South Africa resigned because of a certain allegation. Do you see such happening in Nigeria where a sitting president resigns willfully and what lesson does Nigeria has to learn from this?

The lesson for us naturally is that when people don’t want you, just take a bow. Most times, we find it difficult to take a bow. These seats are not seats where anyone can inherit. It is the people’s seat. It is a seat of privilege. It does not mean that because you did well someone else cannot do better. You should be humble enough to do that. Look at what former president Goodluck Jonathan did despite the allegations and everything, he let go. That is something we should learn to salute. Remember he said that he will never allow the blood of any Nigerian to be shed because of his own ambition.

The Deputy Senate President, Ike Ekweremadu said that civil servants are free to join politics.. Is this consistent with our constitution ?

I don’t agree with him on that. Well, that is his opinion. Civil servants should be seen like the word goes “Civil”, you should be morally upright and you have a service to render as a civil personnel. So, it makes you to be called a civil  servant. You must be found neutral to take the right decisions. 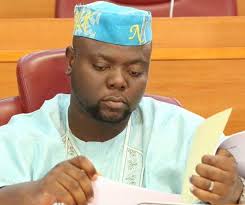 How would you describe the 8th legislative assembly in Lagos?

To be frank with you, there is a place in the Bible where Paul says “I have fought a good fight of faith”.  I can tell you that the 8th Lagos State House of Assembly has fought a good fight of faith. We have made laws that have created employment. We have been able to make laws, move motions and identify credible ideas. We have been able to partner our ideas in the legislative arms. We have been able to create peace in the Assembly. There is a rancour everybody is expecting because there is an opposition party, but it’s been peace all the way because peace shows some level of understanding.  What do we gain from rancor, nothing. So what matters is the approach to governance.