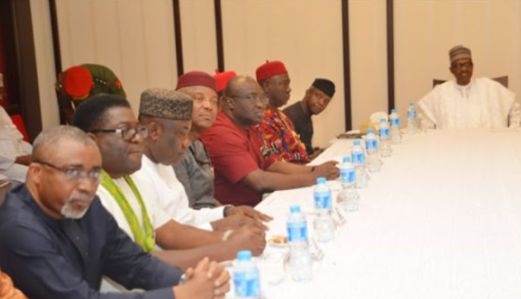 President Muhammadu Buhari has said allegations of under-representation of Igbos in his government were unfounded.

He said while he gave the South-East zone four substantive ministers, he could not take any decision on foreign policy and investments without the input of two of their sons.

According to a statement by his Special Adviser on Media, Mr. Femi Adesina, the President spoke while receiving leaders from the region led by Ike Ekweremadu, at the Presidential Villa, Abuja.

He said Buhari told his guests that while seven states in the North got Ministers of State in his administration, the South East got four substantive ministers.

“I gave South-East four substantive ministers in the Ministries of Foreign Affairs, Trade and Investment, Science and Technology and Labour.

“Seven states in the North got ministers of state; and of the two ministries headed by your sons, I cannot take any decision on foreign policy and investments without their input,” the President said.

Buhari also promised the leaders, comprising governors and ministers from the region, the President of Ohanaeze, Chief Nnia Nwodo, and representatives from the National Assembly, that he will visit states in the zone soon.

The President assured them that the region will benefit more from roads and coastal rail projects, which are of critical importance to the economy.

He said the Second Niger Bridge, the East-West Road and the Coastal rail project, are receiving utmost attention from his administration.

The President said counterpart funding from the Chinese government would substantially fund these projects, which when completed will improve the welfare, well-being and economy of the people in the region.

“I know the Chinese are very competent in handling such projects and we will ensure that we get the money for the projects to take off.”