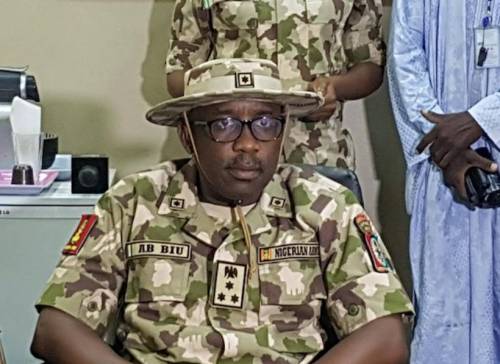 Major General Abdulmalik Bulama Biu, the General Officer Commanding (GOC), 7 Division of the Nigerian Army Maiduguri and Sector Commander (Sector 1) Operation Lafiya Dole, has said no one is safe from insurgents’ attacks, not even those in the government.

The new GOC said while speaking at his promotion reception in Maiduguri.

“The governor is not spared likewise even the messengers in the office. The woman in the market and the man or woman on the streets, the journalists even with the mighty pen are not spared with insecurity around,” he said.

He also assured the nation that the force would not be deterred from fighting the insurgency in the country despite ambush on men of the Nigerian Soldiers.

Some soldiers, including high ranking officers, and aid workers were killed during a recent attack by the Boko Haram insurgent group in Borno and Maiduguri states.

He added that the officers and soldiers in the frontline would remain resolute in their mandate to end the insurgency.

He said: “We will not be deterred by the recent ambush of our troops and the humanitarian workers. We assured that we will do what is needful to bring the situation under control.”

Busola, Timi Dakolo Given Letter Of Invitation, Not Arrest Warrant -Inspector-General Of Police