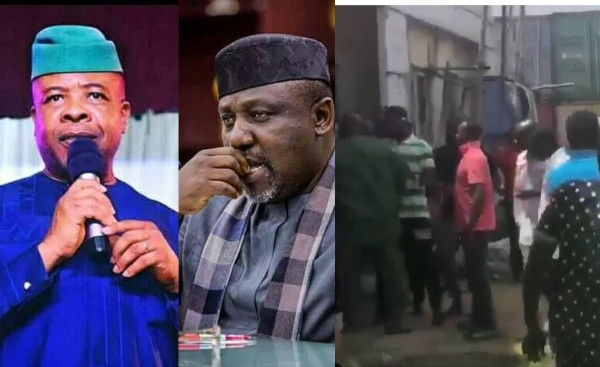 Rochas Okorocha is demanding an apology from a member of the Committee on Recovery of Stolen State Government Assets set up by Governor Emeka Ihedioha, for slapping his daughter Uloma-Rochas Nwosu as seen in a viral video last week.

A statement released by Rochas Okorocha’s media aide Sam Onwuemedo, alleged that the former Imo State Govenor’s first daughter and Uche Nwosu’s wife had gone to the ‘ALL-IN’ furniture store owned by her mother to know why it was invaded by members of the committee when she was allegedly assaulted.

Insisting that the store was sealed by the Economic and Financial Crimes for investigation, Okorocha recounted not using his power as Governor of the state to intimidate anybody.

“On Friday, July 26, 2019, a member of the Committee on Recovery of Government Property set up by Governor Emeka Ihedioha and led by Mr. Jasper Ndubuaku, slapped the daughter of the former governor of Imo State, Mrs. Uloma Rochas Okorocha, when she went to the All-In Furniture Store owned by her mother, to know why members of the committee invaded the store and began to tamper with items, including the ones inside the containers, especially when the EFCC had marked the shop for investigation also following their petitions to that effect” the statement read in part.

In reaction to the claims made Governor Ihedioha through his Special Adviser on Media, Steve Osuji said “We are not aware that such thing happened. This blackmail will not stop the state government from recovering movable government assets which were stolen. If they are sure of what they are saying, let them go to court. They know the right thing to do.”