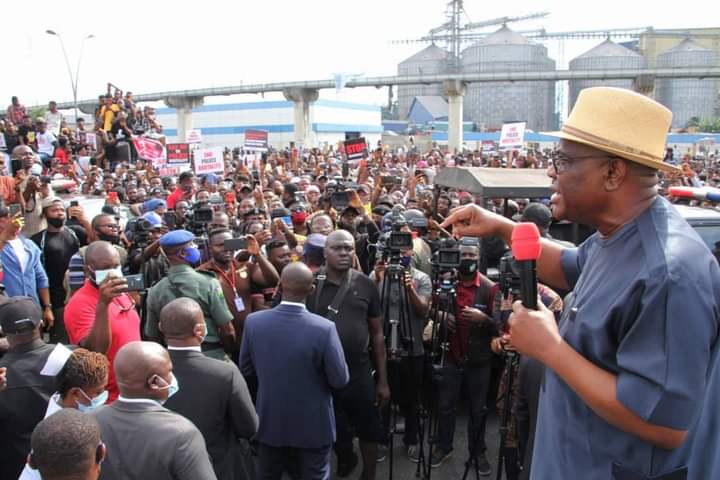 Following his failed attempt to stop the EndSARS protest in Rivers on Tuesday, the Rivers State Governor, Nyesom Wike says all Nigerians should support the total reform of the Nigeria Police Force.

Addressing the EndSARS protesters at Government House, Port Harcourt, Governor Wike told them not to be satisfied that the Special Anti-Robbery Squad (SARS) of the Nigeria Police Force has been scrapped.

“If we do not reform the Police, the same SARS officers will be deployed to other units of the Force to continue their evil acts.

“It is not only to end SARS. Already, there is a pronouncement to scrap it. But every Nigerian should support the total reform of the Police.

“SARS cannot and has never been our friend in Rivers state. They killed a lecturer at Ken Saro-Wiwa Polytechnic without a cause and people kept quiet.

“President Muhammadu Buhari said he will reform the Police. Let us be ready to hold him by his words,” he said.
The Governor stated that he took an oath of office to protect the lives and property of Rivers people.

According to him, this made him condemn the brutality and kidnapping activities of SARS officers against Rivers people.
He pointed out that instead of national support against such evil, leaders in some quarters reduced it to politics.

“What we find in this country is that people play to the gallery. They hate people who speak the truth.

“When we raised the alarm over the killings of Rivers people by SARS operatives, nobody listened to us as they said I was playing politics with it.
“No Governor saw the need to speak out against that evil. That was because it was not happening in their States. Now the evil of SARS has touched them, they want everybody to join.

“Rivers State does not play second fiddle. The life of Rivers people matter to me and I will continue to protect them.
“What you are protesting against, I had campaigned against it long ago. If only they listened, we will not be protesting today”, he stated.