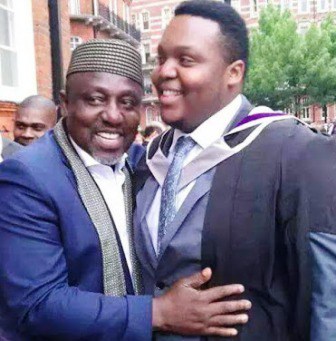 Governor Rochas Okorocha of Imo State is in pains. His first son, Aham is critically ill.

Besides, family sources confirmed to us that few days Aham slumped and had to be rushed to the hospital and was flown overseas for treatment.
He was accompanied by the governor and the his mother

The minister for Science and Technology, Dr. Ogbonnaya Onu during the South-East zonal meeting of the All Progressive Congress (APC), confirmed the incident

“I had been in communication with Governor Okorocha and he had assured me that he would attend this meeting but sometime last week, the governor called me to explain that he may not be able to attend after all as his son had taken ill and had been hospitalized in a London.”