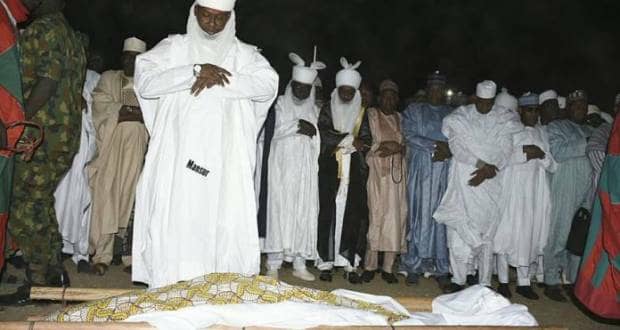 His corpse was received by Kano State governor, Abdullahi Ganduje and Emir of Hadejia, Adamu Maje and order top government functionaries around 8pm.?

The corpse was conveyed to Emir’s palace by a Nigerian Air Force’s Ambulance.

In his remark, Kano State Governor Dr Abdullahi Umar Ganduje described late AVM Hamza Abdullahi as a sure-footed and well serving visionary leader who spent most of his life serving his fatherland in different capacities.

He added that “the late ex-Kano governor will be long remembered for his just leadership and hardworking disposition is shown particularly in Kano State in view of the people-oriented projects executed during his reign as a military governor in the state.

He prayed that Almighty Allah would comfort his family, friends and associates the fortitude to bear irreplaceably lost.

In his remark, Emir of Kano Mallam Muhammadu Sanusi II described late AVM Hamza Abdullahi as a kind-hearted and hardworking leader whose contribution rendered towards nation-building during his lifetime will be indelible in the mind of Kano populace and the nation at large.

He also reminds people to keep themselves constantly aware that death is an inevitable sign of mortality awaiting every living thing at the exit of this temporal world.