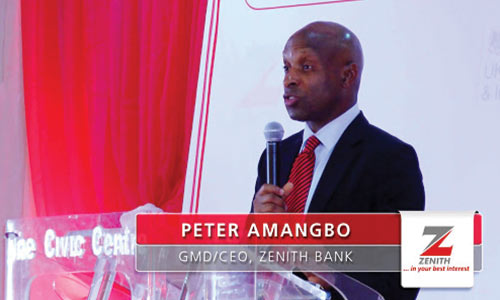 Zenith Bank has reacted to the arrest of its top executive, Peter Amangbo, by the Economic and Financial Crimes Commission (EFCC).

Recalls, that the Group Managing Director (GMD) of the bank, Peter Amangbo, was arrested over a series of transactions his bank allegedly carried out on behalf of one of Nigeria’s largest oil-producing states, Rivers.

The EFCC alleged that the transactions, at least N117 billion in value, are suspicious in nature and that the bank failed to report them as demanded by law.

Amangbo was first invited for questioning on August 23 but was freed on administrative bail and asked to return on August 24 for further interrogation. He was questioned again on Monday and was still at the EFCC office on Monday night.

The bank, in a statement signed by its head of corporate communication, Victor Adoji, on Tuesday, confirmed that its official was “invited” by the anti-graft agency in relation to an on-going issue between the Rivers State Government and the EFCC with regards to the government’s accounts with the bank.

The bank said the EFCC requested details of how the River State government’s accounts were operated in terms of utilisation of funds over a period of time.

“As a responsible corporate citizen, the bank honoured the invitation during which our GMD clarified the areas of concern with the commission,” the disclosure, sent to the Nigerian Stock Exchange, read.