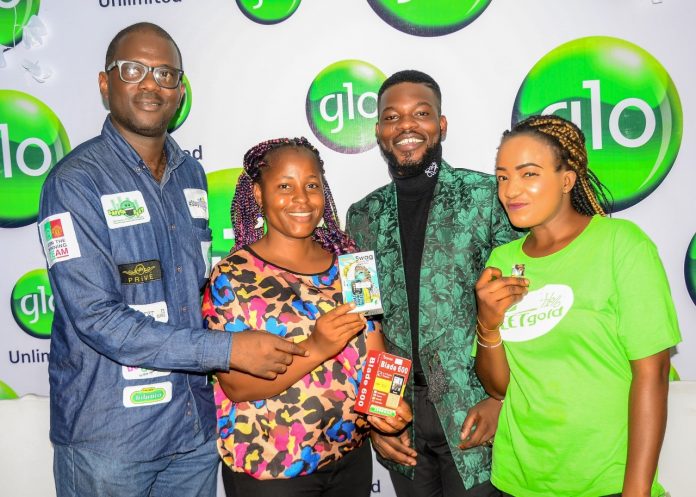 The Tafawa Balewa Square venue of the on-going 33rd Lagos International Trade Fair was agog on Friday with excitement as the grandmasters of data, Globacom, engaged visitors to the Fair in a “Meet and Greet Brodasghaggi” session.

Fielding questions on the Fair Radio, Samuel Perry (Brodashaggi) said Nigerians were showing great love to Globacom because “a network that is giving out should be celebrated. It is not only giving out cash but trade establishment tools like Keke (tricycles), Industrial Sewing machines, Grinding machines and power generators”.

Also speaking, Globacom’s Regional Activation Manager, Lagos and Ogun, Mr. Olufolahan Faseyitan urged Nigerians to use the opportunity of the on-going “Recharge and Win Big” promo popularly called “My Own Don Beta” to get rewards for their loyalty over the years.

A cross section of visitors to the Glo stand at the Fair commended Globacom for the cool ambience of its stand which offered shelter from the sweltering heat.

One of them, High Chief Ayodele Arogbonlo, an Isanlu, Kogi State based farmer, said “I love the energy level here. We are being attended to in a courteous manner. The network is very good. I have been enjoying it for over 15 years”.

Some of the winners of the lucky dip for visitors who purchased items worth N2,000 and more, praised the network for being people friendly. Thirty-six-year old, Uzendu Roseline said “Glo thank you very much. I am so pleased. This has added value to my life as I will give this phone given to me to my daughter”.

Fifty-one-year old Olayinka Bamidele, a stationery trader at Kakawa, Lagos said “may God continue to prosper Glo. I am grateful for this gift after purchasing a Tecno phone”.

Henry Awanebi, an instrumentalist who lives on Victoria Island, Lagos commended Glo for the speed of its 4G which he has been using for over a year while 17-year-old Nkiru Egbunna who lives in Egbeda area of Lagos State said she is using Glo because of its pocket friendly data plans and the 5 times bonus.

Phone accessories seller, 36-year-old Biodun Ganiyu said “I really appreciate Glo, they surprised me seriously. I am very happy and I am glowing with pride.”

Kylie Jenner and Drake have been spending time together ‘romantically’ after her split from Travis Scott, new report claims