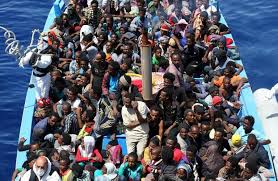 The Federal Government on Monday said it evacuated 1,030 stranded Nigerian migrants from Libya between January 7 and 8, 2018.

Alhaji Mustapha Maihaja, the Director-General of National Emergency Management Agency, disclosed this at a joint news conference by the Federal Government delegation to Libya.

Foreign Affairs Minister, Geoffrey Onyeama, had on January 5 led a delegation fact-finding mission to Libya to secure the release of Nigerian migrants stranded in that country.

The delegation comprised of Abike Dabiri-Erewa, Senior Special Assistant to the President on Foreign Affairs and Diaspora and Muhammad Babandede, Comptroller General of the Nigerian Immigration Service.

Others were Julie Okah-Donli, Director General of National Agency for the Prohibition of Trafficking in Persons and Sadiya Umar-Faruq, Federal Commissioner, National Commission for Refugees.

He stated that a reception centre approved by President Muhammadu Buhari had been set up in Port Harcourt, Rivers for the returnees.

According to him, the returnees on arrival will be formally received and profiled before being transported to their various states.

He said that the reception centre was organised in such a way that the Ministry of Health provided facilities to look after those with health-related problems.

He explained that those who were critically ill were taken to University of Port Harcourt Teaching Hospital for treatment.

He added that the returnees would be profiled through the Immigration, Directorate of State Service and other agencies, emphasizing that those with criminal tendencies and ISIS inclination would be taken
care of by relevant agencies.

Maihaja said the delegation had 21 days to complete its operation.

The Foreign Affairs Minister also said the delegation was in Libya to engage with Libyan Government at the highest level to facilitate the evacuation of the stranded Nigerian migrants from the North African country.

Onyeama said the Nigerian mission in Libya was coordinating the identification of the Nigerian migrants with the support of International Organisation for Migration (IOM).

According to him, they are being joined by a technical team comprising representatives from NEMA, Immigration, and other relevant Nigerian government agencies.

The minister said that the political and security challenges in that country made it difficult to secure the evacuation of some Nigerians back home.

He added that “there are different centres of power in that country. The central government recognized by the UN and AU do not have full control of the territories controlled by rebels.”

He pointed out that there were over 50 detention camps in Libya, many of them under the control of rebels and militia groups.

The minister said that the young Nigerians being trafficked were shattered and battered and seen as a commodity to be traded for economic gains.

He said the Libyan Government blamed the criminal elements for the human trafficking business, noting that the president was keen at dissociating the ordinary Libyan people from the narrative.

He noted that there were complaints about how some migrants in detention camps were being exploited by government officials for economic gains.

He said Nigerians who were residing in Libya legally complained of harassment by Libyan Government officials who they said destroyed their passports and other residency papers.

The NAPTIP Director-General said the agency would profile the returnees to identify those who were real victims of trafficking.

Okah-Donli said, “the returnees would be counseled by trained personnel and those with a medical condition would be treated at the agency’s facilities.”

She said the rehabilitation period would last for six months during which the returnees would be trained on different skills acquisition and empowered with tools.

“We will monitor them for about two years to ensure that they don’t re-embark on the treacherous journey,” she added.

Faleke mocks Yahaya Bello: What do you know about elections? You haven’t even won councillorship seat