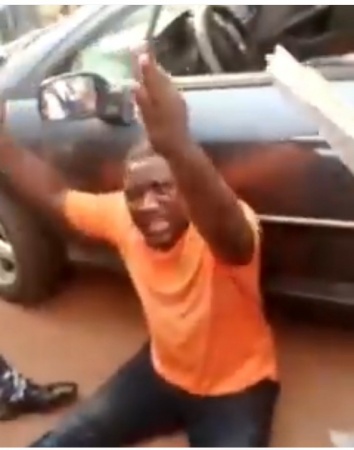 As the hoodlums continue the looting spree across states in Nigeria, luck ran out of a Kogi-based Pastor Sunday Edino and his accomplices who were arrested with medical equipment in Lokoja by the state’s Commissioner of Police, Ede Ayuba and his men on Monday.

Medical equipment worth over N1.2b kept in a warehouse in Lokoja were vandalized and looted by hoodlums.

The Commissioner of police in Kogi State and his men swiftly launched a manhunt on the criminals which led to the arrest of Pastor Sunday Edino and others.

Kogi State governor, Yahaya Bello had earlier warned that youths should conduct themselves peacefully while protesting but threatened that his administration will not spare the protesters should they engage in criminal activities.

The #EndSARS protest has been under control in Kogi State owing to the fact the state governor, Yahaya Bello had earlier lent his voice in support of the youths who were protesting against police brutality across the nation.

However, hoodlums invaded the Agricultural Development Project office along Lokoja-Okene road in the early hours of Monday and carted away fertilizers and other agrochemicals procured to assist farmers during the dry season farming.

The hoodlums extended the looting to another warehouse where relief materials for flood-affected persons were kept.

The rampaging hoodlums broke into the warehouse and carted away materials such as mattresses, roofing sheets, beddings, and other materials meant for victims of flood disasters in the state.  (Text, excluding headline, courtesy Vanguard)

#EndSARS Protests: Nobody can destroy Tinubu, he has done a lot for Nigeria, says youth group