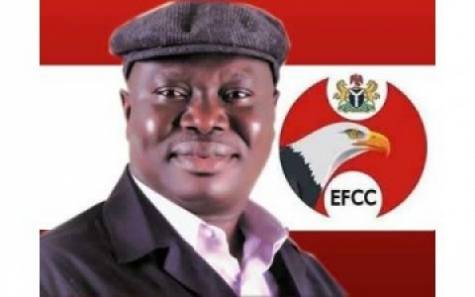 The Economic and Financial Crimes Commission on Wednesday re-arraigned a former Speaker of the Lagos State House of Assembly, Adeyemi Ikuforiji, alongside his then aide, Oyebode Atoyebi for alleged money laundering.

Ikuforiji and Atoyebi’s re-arraignment before Justice Mohmmamed Liman at the Federal High in Lagos on Wednesday came five years after they were discharged of the offence by Justice Ibrahim Buba of the same court in 2014.

The defendants pleaded not guilty to the charge sequence upon which the prosecution counsel, Mr Ekele Iheanacho apply for their in prison custody .

But Ikuforiji’s lawyer Mr Dele Adesina SAN opposed the application vehemently by urging the court not to aceed to the prosecution’s request.

Justice Liman allowed them to continue on the bail earlier granted them by Justice Buba.

However, the judge ordered that their sureties must re-present themselves within 14 days.

He adjourned the matter till February 5, 2015 for commencement of trial.

They were re-arraigned on amended 54 counts bordering on alleged diversion and laundering of N600m belonging to the Lagos State House of Assembly.

In September 2014, following a no-case submission by their lawyer, Chief Wole Olanipekun (SAN), Justice Buba had discharged Ikuforiji and Atoyebi of the entire 56 counts filed against them by the EFCC.

The appellate court ordered that the case file be returned to the Federal High Court for the defendants to be tried afresh before another judge.

Dissatisfied with the Court of Appeal’s decision, Ikuforiji and Atoyebi proceeded to the Supreme Court, but they lost as the apex court affirmed the pronouncement of the Court of Appeal and sent them back for retrial at the high court.