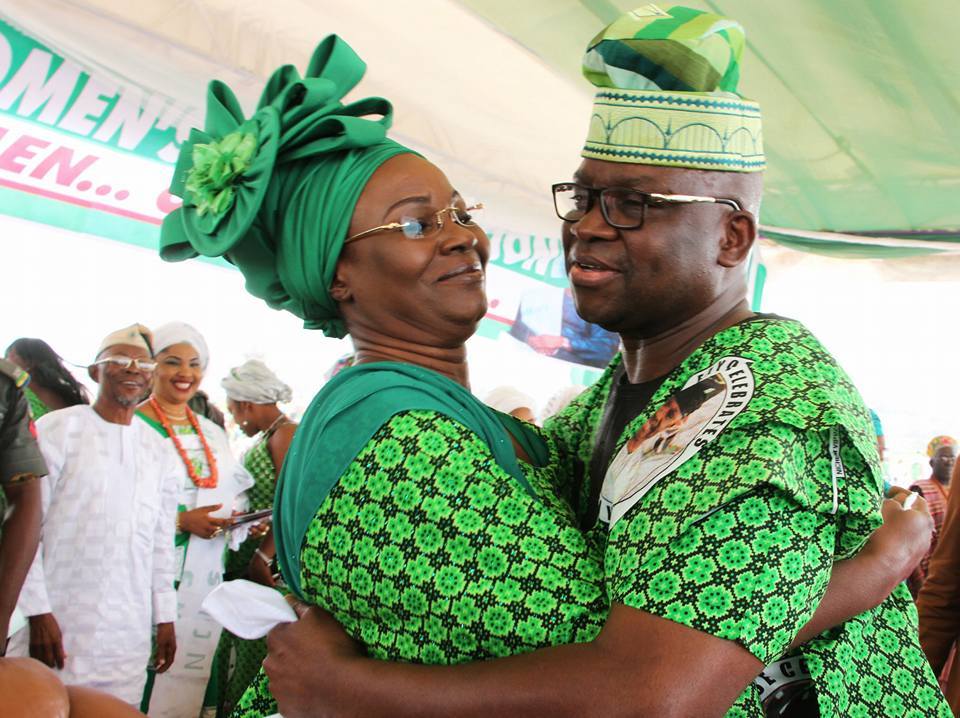 The Economic and Financial Crimes Commission (EFCC) has begun the investigation of Ayodele Fayose, the governor of Ekiti state, his wife, Feyisetan Fayose, and his top aides.

Others being investigated include Lere Olayinka, spokesperson to the governor; Toyin Ojo, the state’s commissioner for finance; Oluyemisi Owolabi, the state’s accountant general.

Sources in the know of the investigation reveal that the anti-graft agency is attempting to nail the governor, his wife, and members of his cabinets on allegations of money laundering and abuse of office.

Some of the letters seen by TheCable, dated July 20, 2018, and addressed to the managing director and the chief compliance officer of Access Bank Plc reveal that EFCC is also investigating the governor for abuse of office.

The EFCC listed four Access Bank accounts being run by “Ayodele Peter Fayose”, and about five accounts in the same bank, being run by “Feyisetan Helen O. Fayose”, believed to be the wife of the governor.

Sources also revealed that similar letters were also sent to other major banks in the country, where the governor and his loyalists run personal transactions.

Insiders also revealed that the banks were asked to present the details of accounts of the governor and his loyalists, including their; statements of accounts, bank verification, and any other relevant information that may help the investigation.

THE EKITI ELECTIONS AND ITS UNDERCURRENTS

After the Peoples Democratic Party (PDP) lost the July 14 elections in Ekiti state, the EFCC official Twitter handle tweeted that the anti-graft agency was coming after Fayose to explain his role in the alleged N1.3 billion fraud, as filed by the EFCC in 2005.

“The parri is over, the cloak of immunity torn apart, and the staff broken. #Ekiti Integrated Poultry Project Biological Concepts Limited N1.3bn fraud case file dusted off the shelves. See you soon,” read the tweet posted hours after Kayode Fayemi was declared winner of the governorship election.

The EFCC disowned the tweet, saying it does not represent the views of the agency.

Wilson Uwujaren, spokesman of the anti-graft agency, said: “in the opinion of most commentators, the tweet betrayed the partisanship of the EFCC in the political contest in Ekiti state”.

“Against the background, the commission is constrained to state that the purported tweet does not represent the views of the EFCC. As a law enforcement organisation the commission is apolitical and was not involved in the recent Ekiti election.

“While it is true that there is a subsisting criminal charge against governor Fayose, the fate of the charge will be determined by the federal high court, Ado Ekiti, at the expiration of his tenure, not the EFCC.”

Olayinka, Fayose’s spokesperson, who is also being investigated, replied the EFCC, asking the agency to apologise for the “inglorious tweet”.

“Just read that @officialEFCC has disowned its inglorious tweet about @GovAyoFayose and I wish to ask if EFCC has also disowned the twitter handle. Methinks EFCC must go beyond mere disowning the tweet and explain to Nigerians what informed it and tender unreserved apology,” Olayinka tweeted.

In September 2017, the commissioner of finance and the accountant general of the state, were arrested by the EFCC.

“They were picked up following their refusal to honour previous invitations for interrogation in relation to pending investigation on the misuse of bailout funds by the Ayodele Fayose administration,” Uwujaren said via a statement.

Fayose is said to have other allegations to answer, including misuse of bailout funds, electoral fraud from the 2014 governorship election (EkitiGate), and the N1.3 billion poultry fraud.

Femi Adesina: Linking Buhari to Benue impeachment saga is paranoia at its worst