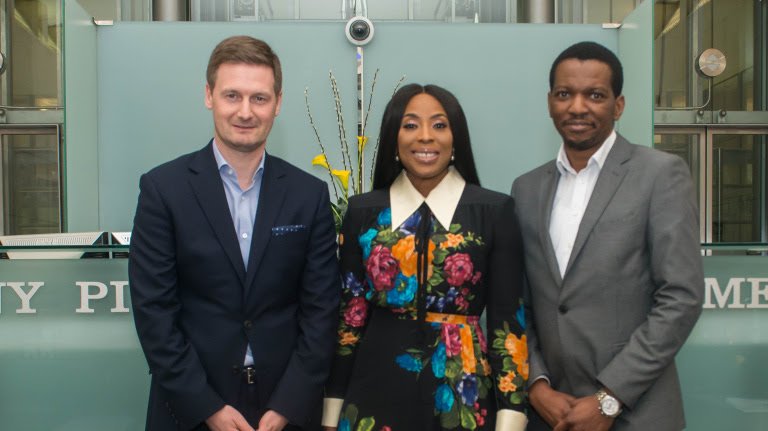 Sony has struck a three-series deal with Mo Abudu’s EbonyLife, with the first project set to be an action drama inspired by the Dahomey Warriors, the female fighters who came together to protect their kingdom.

Dahomey was a West African kingdom in what is now the Republic of Benin. EbonyLife and Sony Pictures Television are co-developing the female warriors project, which SPT will distribute internationally.

Nigeria-based EbonyLife launched in 2013 as an upscale international black TV network. It produces 1,000 hours of English-language content a year. Its first feature film, “Fifty,” was picked up by Netflix and released worldwide. “The Royal Hibiscus Hotel” premiered at the Toronto Intl. Film Festival in 2017.

“Ever since our launch in June 2013, our vision has always been to change the narrative about Africa and to tell our stories from our perspective,” said company CEO Mo Abudu (pictured, with Sony’s Mark Young, left, and Kunle Falodun, right). Abudu became a household name in Africa with her “Moments With Mo” talk show and has been likened to Oprah Winfrey. Forbes has said she is the most successful woman on the continent.

Abudu added: “Now we have the opportunity to bring the fascinating story of the Dahomey Warriors, and many others like it, to audiences around the world. It has been hard work getting here, but that’s what we are known for at EbonyLife. As I always say, ‘If you can think it, you can do it.’’’

EbonyLife already has a deal with SPT in unscripted and is in the throes of adapting game show “The Dating Game” for Nigerian audiences. It has also sealed programming deals with CBS and Disney.

“Mo Abudu is one of the most formidable and creative figures in Nigerian television, and with EbonyLife, [she] and the team are creating something that is truly groundbreaking and extraordinary,” said Wayne Garvie, president of international production for Sony Pictures Television. “Our aim is to help EbonyLife create a portfolio of African content that will fulfill their aim of being one of Africa’s prime creator[s] of premium content.”