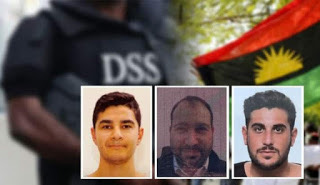 Nigeria’s secret police, Department of State Services, DSS, has detained two Americans and a French, all of Israeli descent for filming a pro- Indigenous People of Biafra (IPOB) propaganda documentary in the South-East without securing the necessary approvals from the Nigerian government.

The foreign filmmakers – Rochman Rudy, Leibman Andrew Jared, who entered the country via the Murtala Mohammed International Airport, Lagos on Business visas issued on their American passports and Benaym Edouard David, with a Business visa on his French passport, were detained by DSS officers on July 9 in Ogidi, Anambra State, while illegally filming the pro-separatist group’s propaganda documentary .

Nigeria about two weeks ago with the assistance of INTERPOL rearrested the leader of IPOB, Nnamdi Kanu in East Africa and returned him to Abuja to continue his trial for treason.

According to a Nigerian security source who confirmed the arrest of the foreigners , Rochman, is believed to be working for i24 news channel, while Liebman is a popular YouTuber and Benaym is an independent videographer.

The source, who asked not be identified, said they were transported to Abuja after their arrest and remain in the custody of the DSS though Benaym, who has a serious health condition, has been handed over to the Embassy of France in Abuja, who have promised to make him available whenever the DSS wants him, our source said.

It was  not ascertained as at the time of this report whether they would be charged to court or just allowed to leave the country.

DSS spokesman, Dr. Peter Afunanya did not respond to our request to comment on the development.

Kanu, one of the country’s most wanted fugitives until his re-arrest after over three years in exile, sensationally claims the Igbos are Jews and thus part of Israel without any credible evidence, and has framed his secessionist agenda around that message.

The Israeli government has however not shown any interest whatsoever in Kanu’s separatist crusade, which seems to enjoy the support of a sizable number of Igbos in-country and abroad.