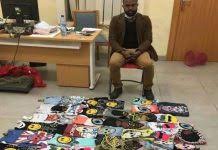 Suspected drug trafficker Ukaegbu Onyekachi has been arrested in Lagos by National Drug Law Enforcement Agency (NDLEA) after he was busted concealing 3.30kg of cocaine in 68 T-shirts.

In a statement released by Mr Jonah Achema, Head of Public Affairs, NDLEA, on Tuesday in Abuja, Garba said the suspect was arrested during the inward clearance of passengers on Ethiopian Airline at the E arrival hall of the MMIA.

The cocaine was concealed in 68 T-shirt stickers but Onyekachi couldn’t escape the eagle eyes of NDLEA detectives.

His arrest came few days after three cocaine cartels were busted at the airport.

The State Commander, Mr Justice Arinze, said 45 bags of the illegal drug weighing 474kg were recovered in the warehouse.

According to him, the recovery was the biggest singular seizure since the inception of the command in 1999.

“We’re grateful to our new Chairman, Brig. Gen. Buba Marwa, who made the feat possible for us by empowering us with the needed logistics to go all out,” he said.

Arinze said the command was continuing with its operation “Hana Kwaya,” in collaboration with other security agencies to raid drug hotspots and markets.

He added that the first phase of the operation had covered some local government areas in the state with the arrest of 54 suspects comprising 12 dealers.

“This also includes 42 drug users, while a total of 604 kilogrammes of narcotic drugs and psychotropic substances have been seized so far,” he said.