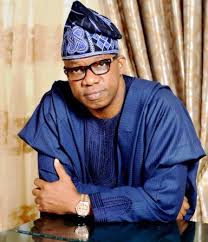 The Ogun State Governor, Prince Dapo Abiodun has been advised by a socio-political group, Ogun Progressive Agenda not to pay attention to some mischievous elements it refered to as “crying sore losers” now said to be waging “unnecessary propaganda war against him, the All Progressives Congress (APC) and the state.

The group said in a press statement through its Patron, Alhaji Rasheed Sanusi that “one would thought that by now they would have stopped crying as advised not long ago by the APC National Chairman, Senator Abdullahi Adamu, when he visited Ogun State as the chairman of the party’s National Reconciliation Committee or better still they should have come to terms with the prevailing realities and accept their fate knowing that “yesterday was their own.”

It was added in the statement that the “disgruntled elements are only trying desperately to blackmail both the APC and Gov. Abiodun with a view to achieving what they could not do in the court of law, public opinion among others.”

The group therefore, advised the party at all levels to ignore those it described as “sore losers” noting that if anybody felt strongly about any issue he should ventilate such at the law court as it is done in the civilised world.

It also pitched its tent with Gov. Abiodun, urging him not to yield to the b?ackmail of those it described as “fifth columnists,” who have constituted themselves as oppositions within the fold simply because they have refused to “smell the morning coffee.”