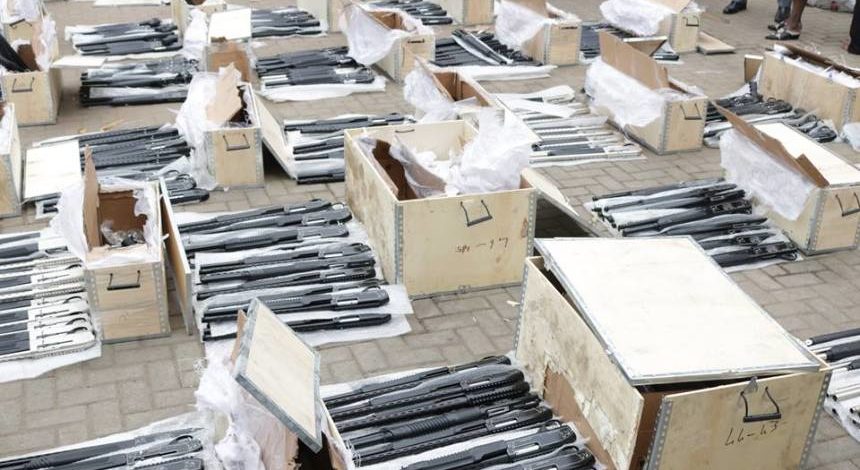 A Deputy Superintendent of Customs, Nwaiwu Chibuzor Ginikanwa,  today,  told Justice  Saliu Saidu of the Federal High Court, Lagos, how the Nigerian Customs Service discovered the 1570 pump action rifles illegally imported into the country by some business men through the Tincan Island Port, Lagos. Ginikanwu, a Deputy Superintendent of Customs with the Intelligence unit, Tincan Island Command, Lagos appeared as a prosecution witness in the trial of Ayogu Great James, Ifeuwa Moses Christ and a company, Great James Oil and Gas Limited, facing trial for alleged importion of 1570 pump action rifles  into the country.

While being led in evidence by the prosecutor, Mr. Julius Ajakaiye, a Deputy Director with the Federal Ministry of Justice,  Ginikanwa said she was on normal routine surveillance on September 6, 2017 at the Tincan Island Container Port, Lagos with  the list of containers to be positioned for examination on that day in which a 1by 20 feet container was also among.

The witness added that on her way to inspect some containers, an agent by name, Ndubuisi approached her and gave her a photocopy of a Bill of Laden.The customs officer said that after inspecting the first container belonging to another person, she proceeded to carry out inspection on the container which Ndubuisi has given her the Bill of Laden.

Ginikanwa said on approaching the container, she saw two agents standing by the container with the container already opened. “I noticed some cartons rapped in sacks with one of the cartons turned open.” The witness said on a closer look, she saw guns and that immediately the two agents, Ikechukwu Okafor  and Ndubuisi realised that she has seen the guns in the sacks, they quickly locked the container and ran away. Ginikanwa said she quickly alerted her boss, Deputy Comptroller of Customs, Bomoi Sulaimon, who in turn, quickly drafted other operatives to join her at the terminal to secure the container while her boss also contacted Deputy Comptroller Enforcement, Nnandi Vera.

The witness said she and the reinforcement from her unit were at the terminal until the arrival of the Enforcement Unit who took the container away for 100 percent physical examination. “When I get back to the office on that day, I received a call from a telephone number 08026797600 and the person who called was begging me in Ibo language to help secure the release of the container.” The witness added that further investigation  of the call line revealed the caller to be one Emeka Festus  During today’s trial, the prosecutor,  Ajakaiye tendered the certified true copy of the Bill of Laden given to Ginikanwa by Ndubuisi and it was admitted in evidenceas the defendants lawyers did not opposed to its admissibility.

Meanwhile, Justice Saidu has adjourned further hearing in the matter till January,. 16th and 24th of next year. It would be recalled that the court on yesterday (Wednesday), refused the bail applications filed by the alleged gun runners, Ayogu Great James and one Ifeuwa Moses Christ. The duo alongside a company, Great James Oil and Gas Limited, located at Number 1, Warehouse Road, Apapa, Lagos    were first arraigned before Justice Saliu Saidu on October 11 this year by the office of the Attorney-General of the Federation (AGF). The defendants were arrested by men of Nigeria Customs Services (NCS) with the said pump action rifles concealed in two 1×20 feet containers, under the pretence of bringing in wash hand basins and Water Closets (WC) from China. In a charge marked
In a charge marked FHC/L/339c/18, the defendants were  alleged to have uttered forged  Bill of Laden and Customs Form M, which they used in smuggling the pump action rifles into the country.

During their arraignment, they were slammed with the eight counts charge bordering on conspiracy, illegal importation of firearms and forgery and uttering of Customs’ import documents The offences according to the prosecutor, Mr. Julius Ajakaiye  are contrary to and punishable under Section 3(6), 1(14)(a), 1(14)(a)(i), 1(2)(c) of the Miscellaneous Offences Act Cap. M17, Laws of the Federation of Nigeria, 2004. They all pleaded not guilty to the charge, following which their lawyers who include: Mahmud Mogaji and Wale Adesokan, both Senior Advocates of Nigeria (SAN), filed their bail applications and urged the court to grant same.

“The charges against the defendants is considered as a serious charge with the level of insecurity in the country such as armed robbery, kidnapping, terrorism and the rest. “Considering the nature of the charge, I can’t exercise my discretion in favour of the defendants. I hereby refused the bail applications”. After refusing the defendants’ bail applications, the prosecutor, Mr. Ajakaiye, informed the court of an amended charge against the defendants. He also told the court that amendment was sequel to the inclusion of one Emeka Umeh Festus, also known as Amankwa, who is said to be at large when others were arraigned before the court on October 11.

Upon taken the not guilty plea of all defendants on the amended charge, the matter was adjourned till today for commencement of trial of all the defendants. Ayogu, a resident of Plot 291, Dawaki extention, opposite Gwarinpa Estate, Abuja, was arraigned alongside his company, Great James Oil and Gas Limited, locates at 1, Warehouse Road, Apapa, Lagos and one Emeka Umeh Festus, also known as Amankwa, who is said to be at large.   The prosecutor that  in a bid to illegally and  unlawfully bring in the weapons, the defendants ulterred and forged Bill of lading, issued in July 28, 2017, to read Guandong, China, instead of Istanbul, Turkey, which was written on the conveying container. They were also alleged to have uttered Form M (application for Import) and Pre-Arrival Assessment Report (PAAR), issued in August 28, 2017, with number MF 20170080364 and CN 20170768490/001, respectively, to read Guandong, China instead of Istanbul, Turkey, as country of origin.

The defendants were also alleged to have altered a forged bill of lading numbered ISB0281398, issued in July 28, 2017, to read 230 packages of wash hand basin and W/C, as the content in the container used in shipping in the illegal firearms.

Sanwo-Olu Will Not Abandon On Going Projects In Lagos – Ambode