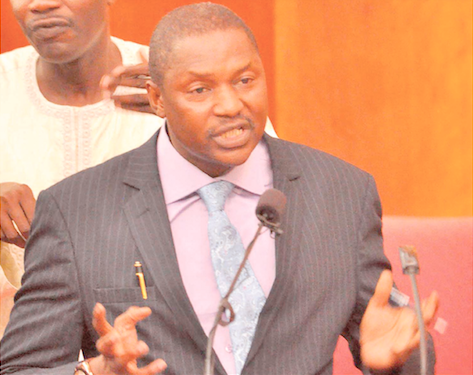 The Attorney General of the Federation and Minister of Justice – Mr. Abubakar Malami, SAN has said that “corrupt judges will go to jail as the government of President Muhammadu Buhari will actively promote and ensure that corrupt judges are prosecuted and their illegally acquired assets are returned to the State.”

“Considering the pivotal role that they play in the administration of justice, it is important to ensure that Nigerian Judges, like the proverbial Ceazer’s wife, are beyond reproach or even suspicion. Gone are the days when corrupt judges escaped from Justice in Nigeria!”

Mr Malami made the commitment at the media launch today of Socio-Economic Rights and Accountability Project (SERAP)’s latest report titled Go home and sin no more: Corrupt judges escaping from justice in Nigeria. The report launched at Westown Hotels, Jummy Hall, Lagos highlights through case studies judicial corruption and the impunity of corrupt judges in the country.

Mr Malami who was the Special Guest at the launch was represented by his Senior Special Assistant (White Collar Crimes) Abiodun Aikomo said that, “I can assure you today that in line with the cardinal agenda of President Muhammadu Buhari’s administration, the office of the Honourable Attorney General of the Federation shall ensure that every appearance of corruption in the Judiciary is dealt among other measures through criminal prosecution and forfeiture to the State of illegally acquired assets.”

According to Mr Malami, “Acts of judicial impunity will also not be condoned, so that our Judges can be judicially accountable at all times in a corruption-free judiciary which is both independent and impartial. All these, shall be achieved, (together with partners like SERAP), without violating the fundamental human rights of the persons involved, and in line with Rule of Law and international best practices. That would be this administration’s own way of saying: Go and sin no more…!”

Mr Malami’s presentation reads in part: “The Judiciary’s one and only mandate should be to deliver justice without fear or favour, affection or ill-will. The world over, the rule of law, and separation of powers which are inseparable components of a democratic government, presupposes the existence of an independent and impartial judiciary.”

“Unfortunately the trust reposed in the Nigerian Judiciary is often betrayed on the altar of corruption or other conducts incompatible with the exalted office of a Judge. Though, there have been cases of removal of some judges for acts unbecoming of judicial officers, often times upon the recommendation of the National Judicial Council (NJC) in line with the provisions of the 1999 Constitution of the Federal Republic of Nigeria (as amended) (1999 Constitution) which empowers the President to remove a judicial officer from office on the recommendation of NJC.”

“Nevertheless, in reality, on a comparison between the widely reported cases of corruption in the Judiciary vis-à-vis the records of judicial officers who have actually been punished therefore, it would appear as if Nigerian judges enjoy total immunity from prosecution for corruption (and allied offences), whereas judges are not immune from discipline for any misdeed let alone for corruption.”

“As we may be aware, this administration promised Nigerians that it will promptly address the challenges facing our nation in the three areas of: (a) Corruption, (b) Economy and (c) Security. Let no one be in doubt, the legitimate expectation of Nigerians in this regard shall be met. In this regard therefore, I am reiterating that the fight against corruption shall be total and will not exclude judicial officers who are found wanting. After all, it is beyond doubt that a corrupt judge cannot meaningfully contribute to the fight against corruption.

“We shall continuously remind our Judges about the Judicial Oath to which they subscribed upon their appointment which inter alia read as follows: “…I will discharge my duties, and perform my functions honestly, to the best of my ability and faithfully in accordance with the Constitution of the Federal Republic of Nigeria and the Law; … that I will not allow my personal interest to influence my official conduct or my official decisions; that I will preserve, protect and defend the Constitution of the Federal Republic of Nigeria. So help me God.’’

“Notably, the title of the report was partly taken from the words of Jesus Christ when he delivered an allegedly adulterous woman from her accusers as recorded in the Gospel according to Saint John Chapter 8 verses 10 and 11 which reads: ’’… when Jesus had lifted up himself, and saw none but the woman, he said unto her, Woman, where are those thine accusers? Hath no man condemned thee? She said, No man, Lord. And Jesus said unto her, neither do I condemn thee: go, and sin no more.’’ (Italics supplied for emphasis).”

“Many questions have been asked among Theologians on the interpretation of the foregoing words, which has equally been interpreted by different Biblical scholars over the years. Whilst I am not pretending to be one, nevertheless one can simply deduce that Jesus neither accepted sin nor condemned sinners. A corollary to this in our criminal justice system is the fact that every citizen is constitutionally guaranteed a presumption of innocence until proven guilty. More so, our criminal justice jurisprudence is not only about punishment.”

“In reality, it cannot be over-emphasized that systemic corruption and impunity is prevalent in Nigeria; and that it cuts across all sectors of the society, unfortunately including the Judiciary! An institution that is universally believed to be the hope of the common man.

Ideally, the Judiciary in a democratic State ought to be accountable less to the public’s opinions and more to the public interest. It should discharge its constitutional roles by being principled, independent and impartial.”
SERAP executive director Adetokunbo Mumuni welcomed Mr Malami’s commitment. He said “Corrupt judges are more dangerous to the society than corrupt politicians because a corrupt judiciary denies both victims of corruption and those accused of corruption access to an independent, impartial and fair adjudication process. SERAP looks forward to working with the Attorney General of the Federation to ensure the full implementation of the recommendations contained in our report.”

The report also calls on the Economic and Financial Crimes Commission (EFCC) to proactively and robustly use their statutory powers to investigate and prosecute judicial corruption and to request from the National Judicial Council files on cases of corrupt judges for prosecution.

Other recommendations include calls for justice for those wrongfully convicted or who have suffered any other miscarriage of justice by corrupt judges; for all judges to be appointed on merit and an end to selection of corruptible judges; for improved conditions of service and working environment for judges; for an end to unfair promotion and transfer of judges; for security of tenure for judges; for full implementation of report on judicial corruption by the late Hon. Justice Kayode Eso; and for training for judges on codes of ethics and conduct, rules of procedure, national and international anticorruption standards, and the consequences if those norms and standards are breached or violated.