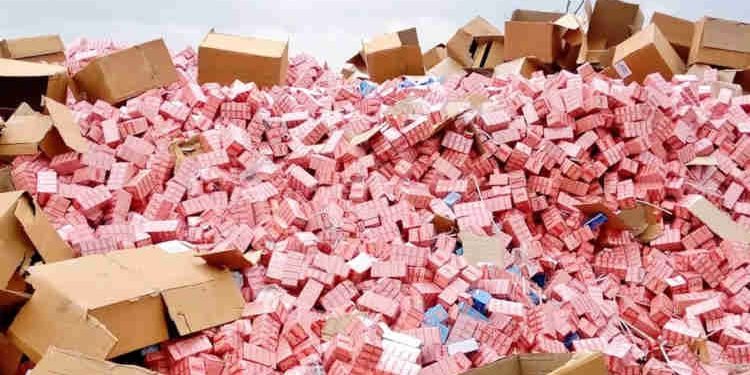 The National Drug Law Enforcement Agency (NDLEA) has intercepted a container-load of Tramadal at the Apapa port in Lagos, the agency’s director of media and advocacy Femi Babafemi said in a statement on Wednesday.

Operatives of the agency also arrested 90 persons including an Indian during a raid of some drug cartels in Lagos.

A total of 614.396kg of various hard drugs were seized in those raids. Babafemi said 1,994,400 capsules of Tramadol packed in 554 cartons were found in the container, which was falsely declared to contain ceramic tiles.

Apapa port Area Commander of the NDLEA Samuel Gadzama said one of the containers bearing the illicit drug had been intercepted and seized in Kenya.

“Though the second container found its way to Nigeria but the eagle eyes of our narcotic agents discovered it during a joint inspection of the ship. We’re continuing with further investigations”, he said.

Operatives of the Lagos command of the agency also raided some drug spots in Agege, Ikorodu, Lekki, Okokomaiko and other parts of the state and dismantled major syndicates, arrested suspects and seized large quantities of hard drugs, the statement said.

Why we repented, by Zamfara ex-bandits