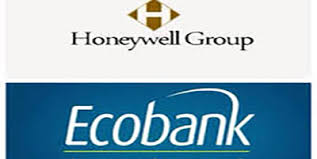 A lot has been said concerning the case between Honeywell and Ecobank, with people knowing little or nothing as per the facts of the matter.

The summary of the fact as it is, is that, Honeywell Group as a business entity and in the individual capacities of those that own the brand and subsidiaries, does not owe Ecobank in any form. And that’s because all that was owed to the bank, totalling ?3.5 billion Naira after the agreement made with the authorities with evidence, was paid.

Honeywell Group commenced discussions with Ecobank in May 2012, with a view to agree a full and final settlement of the indebtedness of three of its operating companies (including HFMP) to Ecobank. All three facilities were originally consummated with the then Oceanic Bank Plc.

Several meetings were held between the parties with a view to achieving a settlement of Honeywell’s indebtedness to the Bank. A settlement was finally reached at the meeting on the 22nd July, 2013 involving the Chairman, Dr. Oba Otudeko CFR, and Ecobank’s Managing Director, Mr. Jibril Aku to the effect that Honeywell should pay the sum of N3.5 billion in full and final settlement of its indebtedness to the Bank Following the meeting, Honeywell immediately paid the sum of N500 million and wrote to the Bank confirming the terms of the agreement. The Bank responded via its letter dated 22nd July, 2013 confirming the payment agreement, and stating that the balance of N3 billion should be paid before the exit of CBN examiners from the Bank.

After several attempts by Honeywell to discuss the payment of the balance, the Parties held a meeting on the 12th of December, 2013 at Honeywell’s offices involving their Chairman, Dr. Oba Otudeko CFR, the Bank’s Managing Director, Mr. Jibril Aku, the Bank’s Company Secretary, Mrs. Denike Laoye and other senior executives of both organizations. At this meeting, the payment agreement was reiterated by the Parties. There was no mention that the settlement amount had changed or that the agreement had lapsed.

The said Bank executives who were in attendance have the authority to bind the Bank statutorily. Following the 12th of December 2013 meeting, Honeywell completed the payment of the agreed N3.5 billion on the 9th of January, 2014.

Honeywell thereafter wrote to Ecobank referring to the meeting of December 12, 2013 and the agreement reached while also confirming that the payments had been completed as agreed.

Honeywell also requested for: (1) a letter of discharge, (2) the release of the securities held against the facilities and (3) an update of the Group’s accounts on the CBN CRMS portal. Ecobank in its response referred to the meeting of the 12th of December, 2013 and confirmed receipt of the total sum towards the liquidation of the indebtedness of the Group’s accounts. Ecobank also promised to ensure that the status of the concerned accounts was updated on the CBN CRMS portal.

However, this has not been done till date. In addition, Ecobank also stated in the same letter that Honeywell’s request for a waiver/concessionary payment was going through an internal approval process and as such the letter of discharge could not be issued.

Honeywell was taken aback as at no time during the negotiation/discussion process was the payment agreement conditional upon any other internal approval process. It was their firm belief that the Managing Director was acting on behalf of the Bank. Honeywell further followed up on its requests via emails and Ecobank promised to update the said accounts accordingly. Nine months after Ecobank promised to update the affected accounts on the CBN CRMS portal, Ecobank responded to Honeywell’s letters and reminders via a letter dated 14th November, 2014 and sought to introduce new conditions to the payment agreement which hitherto had never come up in any of the discussions between the parties.

Honeywell thereafter wrote a petition to the Bankers’ Committee Sub-Committee on Ethics and Professionalism for its intervention and speedy resolution of the matter. Following the receipt of the petition, the Sub- Committee undertook a thorough review of the petition and the positions canvassed by both Parties and a ruling in favour of Honeywell was issued.

Suits at the Federal High Court the CBN issued a directive in 2015, mandating all banks to publish the names of all delinquent debtors. Due to Ecobank’s failure to adhere to the ruling of the Bankers’ Committee and in view of the threat of the inclusion of the names of the affected companies in the list of Ecobank’s delinquent debtors, Honeywell filed Suit No. FHC/L/CS/1219/2015 at the Federal High Court.

In the suit, they sought the intervention of the court to direct Ecobank to abide by the agreements reached with Honeywell, which was essentially the directive of the Sub-Committee. They also asked the Court to direct Ecobank to remove the names of its affected companies from the CRMS register, which the bank had refused to do since February 2014, when it had in writing committed to do so.

The Court thereafter granted an order of interim injunction directing all parties to maintain the status quo pending the determination of the suit. In deliberate disregard of the order of the Court directing all parties to maintain status quo, Ecobank embarked on a spree of filings on the same subject matter that was already before the Federal High Court thereby resulting in a multiplicity of suits with the same parties.

The suits filed included Suit No: FHC/L/CP/1689/2015 wherein Ecobank obtained exparte orders against Honeywell Flour Mills Plc. The said orders were granted by Justice Yunusa on the 18th of November, 2015 and included an order freezing all of HFMP’s accounts. Following Honeywell’s application for the discharge of these orders, Justice Yunusa on the 4th of December, 2015 varied the orders and allowed HFMP limited access to its accounts. Honeywell thereafter appealed to the Court of Appeal via Suit No: CA/L/1247/2015 seeking a discharge of the order referred to in paragraph 13 above.

On 30th March, 2016, the Court of Appeal delivered a ruling setting aside the exparte orders granted by Justice Yunusa thereby restoring HFMP’s right to operate its accounts without any restrictions. However Ecobank again filed an appeal at the Supreme Court while also filing an application for a stay of execution of the Court of Appeal’s ruling referred to in paragraph 14 above. Following the hearing of the appeal, the Supreme Court struck out Ecobank’s application for stay of execution for being an incompetent application.

Ecobank thereafter re-filed the same application for stay of execution before the Supreme Court via Appeal No. SC/402/2016. Aside from the appeal above, Ecobank has filed two appeals at the Court of Appeal against Federal High Court’s decision on some interlocutory applications in the suit instituted by Honeywell.

The Court of Appeal dismissed the appeals and also directed that the hearing of the suit instituted by Honeywell at the Federal High Court be accelerated. In May 2017, Ecobank requested the appearance of Dr. Oba Otudeko as its witness in Suit No. FHC/L/CS/1219/2015. Upon receiving notice of the request by Ecobank, Dr. Oba Otudeko immediately indicated his willingness to testify in the matter.

However following the notification of his readiness to appear, Ecobank however did not take any step to invite him to testify until the sudden service of a subpoena at the Honeywell Office on Tuesday, the 6th of February, 2018, requesting his appearance at the next hearing. However at the hearing of 7th February, 2018, the court dismissed the subpoena for being incompetent, as it was not personally served on Dr. Oba Otudeko.

In spite of this, the Counsel to Honeywell confirmed Dr. Otudeko’s willingness to testify once a firm date was communicated to him. The Judge thereafter directed that parties should return to Court on Thursday, 8th February 2018. On Thursday, 8th February 2018, Dr. Otudeko appeared in Court, willing and ready to testify. However after asking a few introductory questions, Ecobank’s counsel stated that he was no longer willing to proceed with Dr. Oba Otudeko as a witness and that the Court should discharge him.

Following protracted arguments between the Claimant’s and the Defendant’s counsel on the appropriateness or otherwise of Ecobank’s reluctance to proceed with the trial, the Judge adjourned the matter to Wednesday, the 14th of February 2018, for ruling. On the 14th of February, Justice Idris ruled that Dr. Oba Otudeko can testify and allowed cross examination of Dr. Oba Otudeko by Honeywell’s Counsel, Chief Wole Olanipekun, SAN.

And Dr. Otudeko also confirmed that Honeywell has paid the agreed sum of N3.5 billion in total to the bank. Petition against Ecobank’s Solicitor with the Nigerian Bar Association and the Legal Practitioners Privilege Committee Aside from the substantive issues, petitions were also filed against the Counsel to Ecobank, Mr. Kunle Ogunba SAN (as he then was) with the Nigerian Bar Association (NBA) and the Legal Practitioners Privileges Committee (LPPC) regarding his conduct in the suit which fell far below the standards expected of a senior legal practitioner, especially one conferred with the rank of Senior Advocate.

Allegations in the petition against Mr. Ogunba included: filing of multiple actions contrary to the Rules of Court; forum shopping through the filing of the same case before several judges of the Federal High Court; incessant allegations of bias against different judges whenever ‘unfavorable’ rulings were issued against Ecobank; and the use of unwholesome strategies intended to solely embarrass Honeywell.

On the 11th of January, 2018 the LPPC withdrew Mr. Kunle Ogunba’s SAN rank, having found Honeywell’s petition meritorious. Honeywell are yet to formally receive the decision of the Nigerian Bar Association regarding her petition.