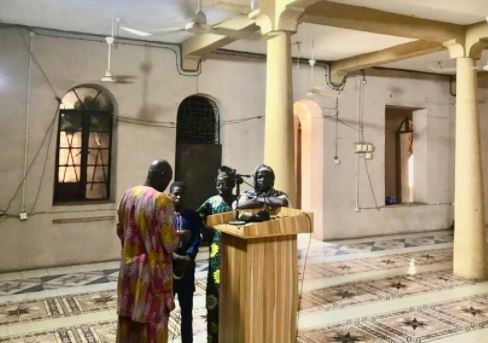 The Muslim Community in Iseyin area of Iseyin Local Government in Oyo State, has commended the League of Imams and Alfas in the town for effecting the repositioning of the mosque’s Qibla, which they claimed had been wrongly positioned for more than 60 years.

According to some congregants, who worshipped at the Oja-Oba Central Mosque, Iseyin on Friday, it was an indication of better things to come, saying that praying against the Qibla was against the tenets of God’s Messenger, Prophet Muhammed.

The Chief Imam of Iseyinland, Imam Abdul-Hakeem Babatunde Olajori, said that the development was important in his life, as it portended a positive turnaround for the Muslim community and Iseyin in general, adding that prayers would be answered speedily when done with the laydown regulations of God.

While going through the history of the mosque, Olajori noted that the relocation of the mosque in the 15th century and eventual return to the particular location over 60 years ago caused the structural defect in the position of the Qibla.

“This development is important in my life as God has used me to bring about a positive change to Iseyin Central Mosque.

“In the 15th century, the mosque was relocated and later brought back to this particular location, modernization came and the mosque was rebuilt with bricks and it was already in use, when our fathers discovered a structural defect in the direction of the Qibla.

“This defect was noticed more than 50 years ago, but recently the Muslim community held a meeting on this alongside the League of Imam and Alfas in Iseyin, where it was unanimously agreedthat there should be a bend towards the Qibla, which we have put into effect today, Friday, the seventh day of Ramadan, which is also the eight day of the English Calendar month of April 2022.

“The grave of our late father, Imam Alalukimba that was there has been relocated to a better place without which we would not have been able to do this.

“Prophet Muhammed (S.A.W) warned that we should not face the burial ground or grave while praying, so the relocation of the grave was also a decision that was unanimously arrived at by the Muslim Community, the family of Late Imam Alalukimba and the representatives of Ijemba community,” he said.

Imam Babatunde Olajori believed that the correction made on the Qibla position would change the minds of many worshippers that have stopped worshipping at the mosque because of the old structural mistake and that prayer offered under the new position would be answered speedily.

While speaking with newsmen after the Friday Jumat, a businessman and indigene of Iseyin, Alhaji Isiak Folorunsho said he was happy that the change was effected without any rancour among the people.

He said that he was proud that the Muslim community was unanimous in making the decision to bring about positive changes in the structure of the historical worship place.

“Many of met this structure like this and the majority might not know about the defect, we are happy today that the correction has been done.

“It will attract many other young ones that saw the defect as an aberration and would hitherto not want to worship there, it is a welcome development,” he added.

Imam Babatunde was of the opinion that the correction would change the minds of many worshippers that have stopped worshipping at the mosque due to the structural defect and that prayers offered while facing the Qibla would be expressly granted by God.