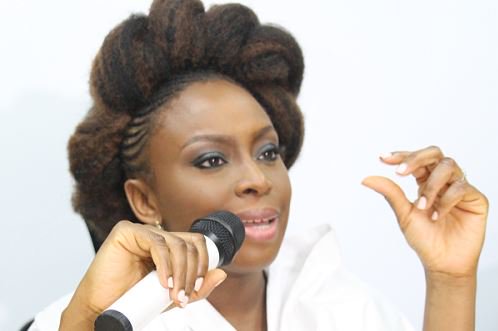 The Nigerian writer described Trump as “stubborn, insensitive and ignorant”.

“I think Trump is very similar to an African big man in so many ways; intentionally stubborn, insensitive, ignorant, very disrespectful of everybody else,” Adichie said in an interview with France 24.

“And even the idea that you have people who are your family members who are suddenly active in the govt and nobody is quite sure why and what qualifications they have. That’s very familiar to me as a Nigerian and I think the lesson there is that democracy is so fragile.”

The ‘Americanah’ author said she is not a big fan of social media because it can “get really ugly”.

She said although technology can be used for a lot of good, it could potentially make human beings lose their empathy.

Speaking about the “most important challenges” of present day, Adichie said “critical thinking is in peril”.

“We have to be very careful so we don’t lose sight of how it is important to think critically. I sometimes worry that technology means that we lose sight of empathy,” she said.

“Social media can sometimes make us forget that there is an actual human being on the other end.

“I am not a big fan of social media but at the same time, I realise that it can be a good thing. It can really get ugly and sometimes seem almost inhumane.”

Adichie said she never expected ‘Americanah’, her award-winning third novel, to “do very well” as she deliberately avoided following convention when writing it.

“I remember thinking that nobody will buy Americanah but that’s fine because I am still getting royalties from Half of a Yellow Sun,” she said.

“I didn’t want to follow the convention, there is a directness in the telling that isn’t necessary common.”

Adichie is also the author of ‘We Should all be Feminists’ and ‘Purple Hibiscus’.