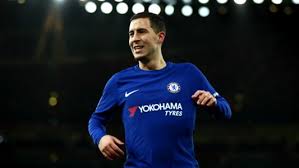 Chelsea star, Eden Hazard has sent a strong warning to Tottenham and Liverpool, following his club’s 1-0 win over the Reds in the Premier League.

Giroud headed in the only goal of the game as Antonio Conte’s men defeated Liverpool on a loan goal at Stamford Bridge on Sunday.

The win takes the Blues to 69 points, two behind fourth place Tottenham Hotspur, who lost 1-0 to West Brom on Saturday and three behind third place Liverpool, with two fixtures left.

Tottenham need to beat Newcastle and Leicester to guarantee their spot in next season’s Champions League, while Liverpool have one match left at home to Brighton.

But should either side slip up, Hazard insisted that Antonio Conte’s side will be ready to pounce in their final two games against Huddersfield and Newcastle.

“It is not in our hands,” the 27-year-old told reporters.

“It does not only depend on us but we will play, we will hopefully win, and then we will see the results of Tottenham and Liverpool and we will give everything.