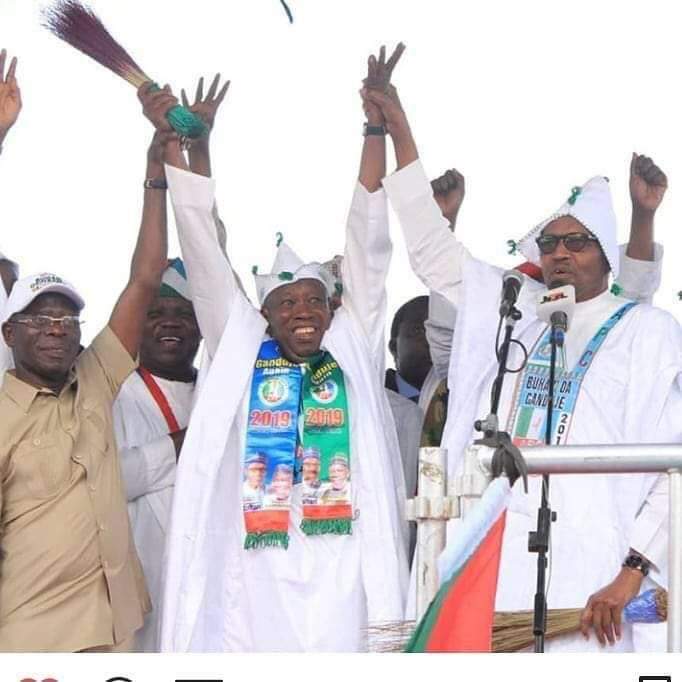 Muhammadu Buhari while addressing his mammoth supporters at Kofar Mata Stadium raised up Ganduje’s hand and ask Kano people to give him massive supports in the forthcoming general elections.

During his campaign visit, the president paid homage to Emir of Kano, Muhammadu Sanusi II

It can be recalled that prior to the arrival of president Muhammadu Buhari, there were widespread rumours that he will dodge from given nod Abdullahi Ganduje’s candidacy in order to protect his reputation as an anti-corruption fighter with the $5m bribery allegation levelled against the governor.

While addressing supporters at the Sani Abacha stadium, Buhari appreciated Kano people for their overly supports given to him since he delved into politics.

“To foster peace and prosperity is my top and highest priority” he pledged.

“As far as peace is concern ask your business partners from the Northeast. They will tell you that most of them have already returned to their domains.

“In terms of economic prosperity we banned rice importation, as we are now able to feed ourselves,” the APC presidential candidate said.

Kano was reached to standstills as massive, hundreds supporters of Muhammadu Buhari were seen in various groups wearing t-shirts and native attires branded with Buhari and Ganduje images.

Convoys of open vans, blaring deafening sound of campaign songs, enveloped with glossy campaign posters of Buhari and Ganduje were spotted all over, screeching tyres to impressed party supporters as well as onlookers waiting by sides of main roads to catched glimpsed of President Muhammadu Buhari and his entourage.

Lagos assembly: Why Ambode is at risk of impeachment