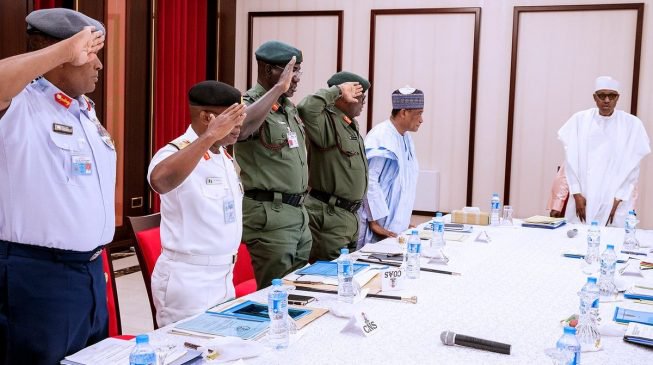 President Muhammadu Buhari has met with the service chiefs and inspector-general of police for the second time in the last few days.

The meeting was over the spate of attacks on Nigerian troops by Boko Haram insurgents.

Over 100 soldiers are believed to have been killed in the most recent attack in Metele, Borno state.

TheCable learned from a presidency source that Buhari met with the security chiefs on Sunday morning at the presidential villa, Abuja to determine how to handle the killings.

Soldiers fighting Boko Haram on Saturday sent an SOS to the president, urging him to probe the quality of weapons procured by the military authorities.

The soldiers accused the military authorities of negligence and providing them with obsolete weapons.

Garba Shehu, senior special assistant to the president on media and publicity, had on Friday quoted Buhari as saying immediate measures are in place to end the menace.

“No responsible Commander-in-Chief would rest on his oars or fold his hands to allow terrorists to endanger the lives of its military personnel and other citizens,” the statement quoted Buhari as saying.

“Our loyal forces have proved their strength over the terrorists and we are ready to give them all the needed support in terms of equipment and manpower to succeed in ending the renewed threat.

“In the coming days, I am engaging the military and intelligence chiefs in extensive discussions on the next steps we shall be taking.”