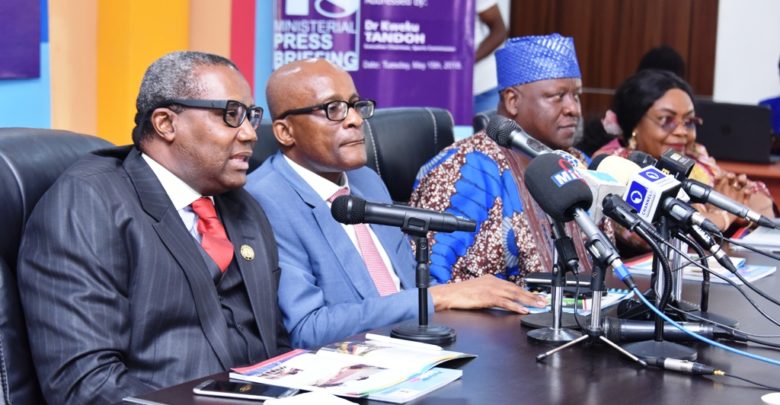 Following the request of the state governor, President Muhammadu Buhari has approved the release of National Stadium, Surulere to Lagos State Government for retrofitting and upgrading to host international sporting tournaments, the State Government has confirmed.

Speaking at the ongoing annual Ministerial Press Briefing to mark the third anniversary of Governor Akinwunmi Ambode’s administration held at Bagauda Kaltho Press Centre in Alausa, Chairman of Lagos State Sports Commission, Mr Kweku Adedayo Tandoh, said it was gratifying to report that after series of back and forth, action would commence next week on paperwork for the formal handover of the facility to the State Government.

Responding to a question on the delay in handover of the stadium to the State Government for upgrade from its present state of decay, Tandoh said the approval for the release was given verbally by the President during his visit to Lagos few weeks ago, while terms of the agreement would now be based not on concession but complete release to the State Government.

Giving details, Tandoh said: “You would recall that the Lagos State Government signified interest in taking over completely the National Stadium and the Governor did not just say it, he actually met with the Minister of Sports and a tour of the facility was carried out.

“One thing later developed and there were signs and signals that the Governor received that they were not actually ready to hand over the Stadium to us rather it seems as if they just wanted a concession agreement where the State Government would spend the money, get it fixed while the Federal Government would still be in place but that is not what Lagos State Government wants.

“So, during the visit of the President to Lagos State few weeks ago, the Governor at the State Dinner was able to grouch the intention again and he mentioned it in his speech to the President and the President verbally gave approval that that was going to be in place. Just yesterday, the Governor directed that I proceed to Abuja next week to deliver some communications that are necessary to put in place a formal handover of the National Stadium to Lagos State Government. We are grateful that this time they will give it to us on the terms that the Lagos State Government has requested for,” he explained.

On activities of the Commission in the last one year, Tandoh said in line with the commitment of the present administration towards provision of world class sporting facilities, approval had already been given for comprehensive renovation of Campos Mini Stadium in Lagos Island, Teslim Balogun Stadium, Surulere; Mobolaji Johnson Sports Centre, Rowe Park, Yaba; Isheri Football Field/Swimming Pool, and Ijede Mini Stadium, Ikorodu.

He said both the Teslim Balogun Stadium and Campos Mini Stadium would have their artificial turf replaced with natural grass, while the remaining seats of Agege Stadium would be covered in addition to the upgrade already done in preparation of the facility for Confederation of African Football (CAF) matches.

He said within the period under review, the State Government awarded contracts for transformation of Onikan Stadium to an all-covered ultra-modern international stadium with FIFA certified artificial turf and multipurpose arena for entertainment concerts with capacity to accommodate 10,000 people, while preliminary works had already commenced on the construction of Maracana Stadium in Ajegunle.

He said it was also significant to report that the State Government has concluded plans to establish three viewing centres across the State for fans to watch world cup matches free of charge.

“Just yesterday, Governor Ambode approved that we should establish three viewing centres in Mushin, Alimosho and Ajegunle. The centres will be in place for the duration of world cup and will serve as venues where people in those areas can watch world cup matches free of charge,” Tandoh said.

He said approval had also been given for the employment of full time coaches as well as contract coaches, while training grants were also paid for a total of 300 state athletes in individual sports, combat sports, team sports, racket sports, traditional sports, para sports and deaf sports.

He added that as a result of the deliberate policies put in place, many of the athletes produced at sport tournaments organised in the State eventually ended up representing the country at international tournaments, just as he assured that government would continue to put efforts in place to promote sports at the grassroots.

Besides, he said as part of efforts to reposition the Commission, a four-year strategic sports development plan had already been approved for development within 16 weeks in partnership with PricewaterhouseCoopers Limited, adding that the plan would engender development of a strategy plan, staff capability assessment and performance management framework development