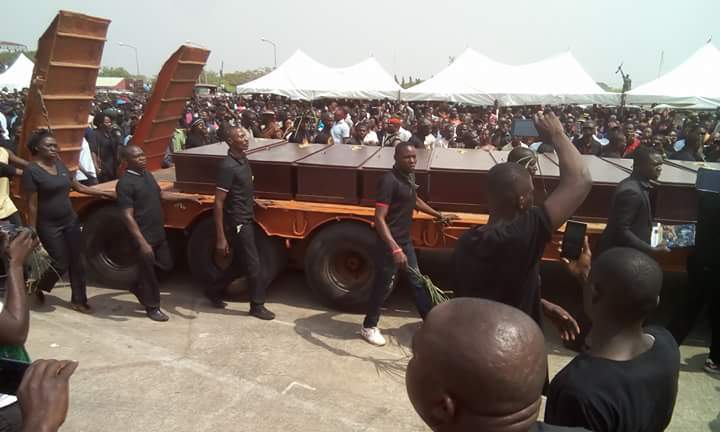 A row has broken out over the language of a signpost installed at the grave site of those killed in violent attacks on communities in Benue State early January.

‘Burial site for 73 victims of Fulani herdsmen massacre’ in Guma and Logo Local Government Areas was inscribed in white and brown block letters on a metal board with isolated green background.

The Christian Association of Nigeria (CAN) installed the signpost at the mass grave along Achusa Road just south of Makurdi, the state capital.

On January 11, the Benue State Government conducted a mass burial for 73 villagers killed in suspected herdsmen attacks on several villages between January 1 and 2.

Residents said the attacks left more than 100 villagers dead, but the state was only able to evacuate 73 bodies for mass burial because some villagers had summarily buried some of those killed in their communities.

The bodies that were taken to the mass grave were either of those who arrived dead at Benue State University Teaching Hospital in Makurdi or those who died while receiving treatments.

The concrete vaults at the mass grave are identical in their horizontal dimensions, and occupy less than half of the total 2.5 acres hurriedly cleared by the state government along the untarred road.

But weeks after the Benue State chapter of CAN erected the signpost, some Nigerians are raising concerns over the tone of inscriptions.

“The attacks were carried out and the police are still investigating,” said Shettima Mohammed, secretary of herders association in Benue. “It is hasty, and therefore, wrong, for the Christian Association of Nigeria to say the Fulani are the killers.”

Mr. Mohammed said CAN’s action further entrenches his fears that the farmers-herders crisis across the north-central is being increasingly politicised.

But for the Christian body, the sign was the least that could be done to keep the memories of the victims of the attacks and no one should see it beyond that purpose.

“There’s no hidden agenda behind the signpost,” said Samson Ayokunle, the CAN president, in a telephone interview on Sunday afternoon. “We put it there strictly for history.”

The Christian leader said the signpost accurately recorded what happened to the villagers in Benue, a position he said was bolstered by the pronouncements the Minister of Defence, Mansur Dan Ali, and the Inspector-General of Police, Idris Ibrahim.

“Shortly after the people were killed, the Minister of Defence, Mansur Dan Ali, said the killings were due to the enactment of anti-open grazing law in Benue State and did not deny that herdsmen were responsible,” he said.

“Other Fulani leaders have never said the attacks are not being carried out by their people, they only said the anti-open grazing law was the cause,” he added.

Mr. Ayokunle said CAN put up the signpost because the victims were Christians and those responsible for their demise are known even though they have not been arrested.

Those against blaming Fulani for the attacks said the signpost could evoke memories of the aftermath of the 1966 coup, but acknowledged that Nigerian history must be appropriately told.

“Those who erected the signpost in Benue were lazy,” said Cheta Nwanze, a security analyst with SBM Intelligence in Lagos. “As lazy as the Northerners who 50 years ago punished all Igbo for the actions of Kaduna Nzeogwu and Emmanuel Ifeajuna, or the Igbo who blame all Northerners for the actions of Murtala Mohammed and Ibrahim Taiwo.”

“Naming the perpetrators of massacres and mass murders is something we should aim for rather than collectively assigning guilt,” he added.

Mr. Nwanze said the Nigerian state has worsened tribal tensions in the country by failing to address past occurrences.

“In the absence of justice, such a collective guilt mindset will continue to prevail, and when we keep shutting down people who want to remember their dead, rather than let them air their grievances, we only add more heat to the pressure cooker without letting steam to escape,” Mr. Nwanze said. “It will blow up. Some day.”

Some bereaved families interviewed  said they had no reservations about the memorial since some of them had long identified their attackers as Fulani and the police had identified suspects arrested in similar attacks across the region as Fulani.

The police in Benue declined comments about the signpost when reached by PREMIUM TIMES between Sunday and Monday.

The state government, however, sees nothing wrong with the sign, saying the Fulani had threatened large scale attacks long before the early January killings.

“Who else do you want us to blame for the killings if not the Fulani?” Tahav Agerzua, a media adviser to Governor Samuel Ortom,said on Monday afternoon. “The Miyetti Allah threatened attacks over the anti-grazing law several months before they were carried out.”

The controversy comes as President Muhammadu Buhari arrives the state on a condolence visit over the attacks. The killings had pitted the governor and the president, both of the ruling All Progressives Congress, against each other.

Mr. Ortom openly criticised the Buhari administration for doing too little to end the killings, and, in some cases, blamed the police for conspiring with the attackers.

The president has denied dithering over the crisis, saying his government would work to protect Nigerians at all times.

Mr. Mohammed said his association would work with other Fulani leaders in Benue to ignore the message on the signpost and live in peace.

“We will tell our people to ignore their provocative signpost and remain peaceful,” Mr. Mohammed said, but said they would continue to push to upturn the anti-open grazing law that commenced in the state last November.

President Buhari To American Secretary Of State, Rex Tillerson: Why We’re Being Careful On Rescue Of Chibok/Dapchi Schoolgirls