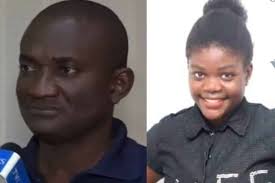 A prosecution witness, Nneka Maryjane Odezulu, in the on going rape and murder trial of the Bus Rapid Transit (BRT) driver, Andrew Ominnikoron, on Monday narrated to the court how she was raped from behind by the defendant.

Odezulu the first prosecution witness, who was testifying before Justice Sherifat Sonaike, of Lagos High Court sitting at Tafawa Balewa TBS, said the defendant raped her from behind after tearing her clothes.

She narrated that the defendant ordered her to remove her clothes that she was not a baby.

The witness who was led in examination in chief by the Lagos State, Attorney General and Commissioner for Justice, Moyosore Onigbanjo SAN, said that before the defendant raped her, he slapped her and held her neck and she couldn’t breath again and he tried to strangle her and then tore her clothes.

Odezulu, 29, a sales representative and a mother, said that on November, 25, 2021, after she closed from her place of work, around 8pm, which is the time she normally close she stood at Alesh Hotel Bus Stop where she saw the BRT bus parked.

She said that  she the driver (the defendant) and asked him if he was going to get to  her bus stop Jakande, and he said yes so she asked how much the fare was and he said N100, so she boarded the bus and sat at the back.

The witness stated that in  about 3 to 4 seconds a man approached the defendant and asked him if he was going to Oshodi and he said yes then they started arguing about the price but later didn’t enter the bus.

Odezulu said” When I entered the BRT, the lights were on, but on getting to Lekki Conservation, Lekki – Ajah express way, he stopped the bus  and brought out one medicine, he took the medicine with one bottle water, so I did not bother myself because I thought it was a medication.

“After that he asked me to come to the front seat that why I’m I sitting at the back seat, then I stood up and went to sit at the front. Then he started asking me questions, what is my name? how old I am, who do I live with?, in the process of asking me questions, he brought out his phone and talked about two transactions.

” So he concluded and said back to our discussion, and said let’s go and park somewhere and discuss. I said sir, I am coming back from work and I am tired and I need to go and pick my daughter from after school care, that was when I noticed that his manhood, was up.

” Then I brought out my big phone, I wanted to call somebody and record what was happening, he was like what I’m I doing, who do I want to call with my phone, he got up from the driver’s seat and collected my phone from me.

“We started dragging and he said I should remove everything because I was not a baby. He slapped me and held my neck and wanted to strangle me, I couldn’t breath again, then his face changed and he said that if he kills me now, nothing will happen and nobody will know where I am that I should respect my self.

“He pushed me down at the back seat, I held the seats and was begging him, he held the knife, tore my clothes and raped me from the back.

“After that I told him to stop me that I want to come down, he said I told him that I was going to Jakande that he will drop me at my bus stop. On getting to my bus stop, I asked him to please give me my phone and open the door for me, then he started apologising that he was sorry for everything that happened.

The witness further said ” He asked me to give him my phone number, I gave him before he gave me back my phone and then opened the BRT door. Then I used my big phone to record the plate number from the back.

“Few hours later he called me and said he was sorry, and asked me if I had gotten home, have I picked my daughter from after school, I did not answer any of his questions then I ended the call. He called me back the next day and subsequently but I did not pick his calls.

She also said that “After the incident, whenever I’m coming back from work and see any BRT Bus, I use to look inside to see if it was him. I have seen him like four times, at that Chevron Tollgate, when he passed”, Odezulu said.

When asked if she reported the rape case at the police station, she said no that she has had a bad experience with the police, at Jakande and that if she had reported they would have insulted her.

The witness showed the court the stripped dress, she wore on the day she was raped, by the defendant, it was tendered before the court and the court admitted it in evidence as exhibit 1.

Earlier the defendnat’s counsel, Mr Abayomi Omotubora, objected to the question of whether, the man that argued with the defendant later boarded the bus and if she reported the rape case to the police that it was a leading question.

He also objected to the admissibility of the exhibit sought to tender that it was not stated in the proof of evidence, and cited Section 221 (1) (3) 2011 and 36 (6), 1999, of the evidence act to butress his argument. He urged the court not to admit the exhibit in evidence.

In his response, the AG, urged the court to dismiss the objection of the defence counsel.

In a short ruling, Justice Sonaike, over ruled the objections of the defence, counsel that asking a witness if she reported the case to the police was not a suggestive question and admitted the exhibit in evidence.

At the resumed hearing of the matter yesterday, Onigbanjo SAN, informed the court that the prosecution had amended the charge and dated May 6 and an amended additional proof of evidence also dated May 6, 2022, pursuant to Section 155 and 251 (3) of the administration of criminal justice law of Lagos State, and urged the court to let the defendant retake his plea.

The five count amended charge was read to the defendant and he took his plea.

Ominnikoron is facing a five-count charge bordering on rape, conspiracy, felony, sexual assault, and murder preferred against him by the Lagos state government.

The prosecution said that the defendant on November 25, 2021, allegedly raped a 29 year -old lady Nneka Maryjane Odezulu, without her consent.

It said that the incident took place at about 8pm, at Lekki- Ajah Conservation centre Lekki Ajah expressway Lagos.

The Prosecution also told the court that Ominnikoron conspired with others now at large conspired to commit rape and murdered his 22-year-old passenger, Oluwabamise Ayanwole, a fashion designer.

It said that the defendant had sexual intercourse with Oluwabamise Ayanwole, without her consent and murdered her, at about 7pm, between Lekki Ajah expressway and Carter bridge, on February, 26, 2022.

The prosecution also said that the defendant and others at large on February 26, 2022, unlawfully killed one Oluwabamise Ayanwole by throwing her out of a moving bus between Lekki- Ajah expressway and Carter bridge.

The defendant was also accused of sexually assaulting a 29 year old woman one Victoria Anieke, on December 29, 2021, between Ikorodu and Mile 12 area of Lagos State.

According to the prosecutor, the offences committed is contrary to and punishable under Sections 411,223,260 and 165 of the criminal law of Lagos State 2015.

However, the 47-year-old defendant pleaded not guilty to the charge preferred against him.

Consequently, Justice Sonaike, adjourned the case till today for continuation of the trial.