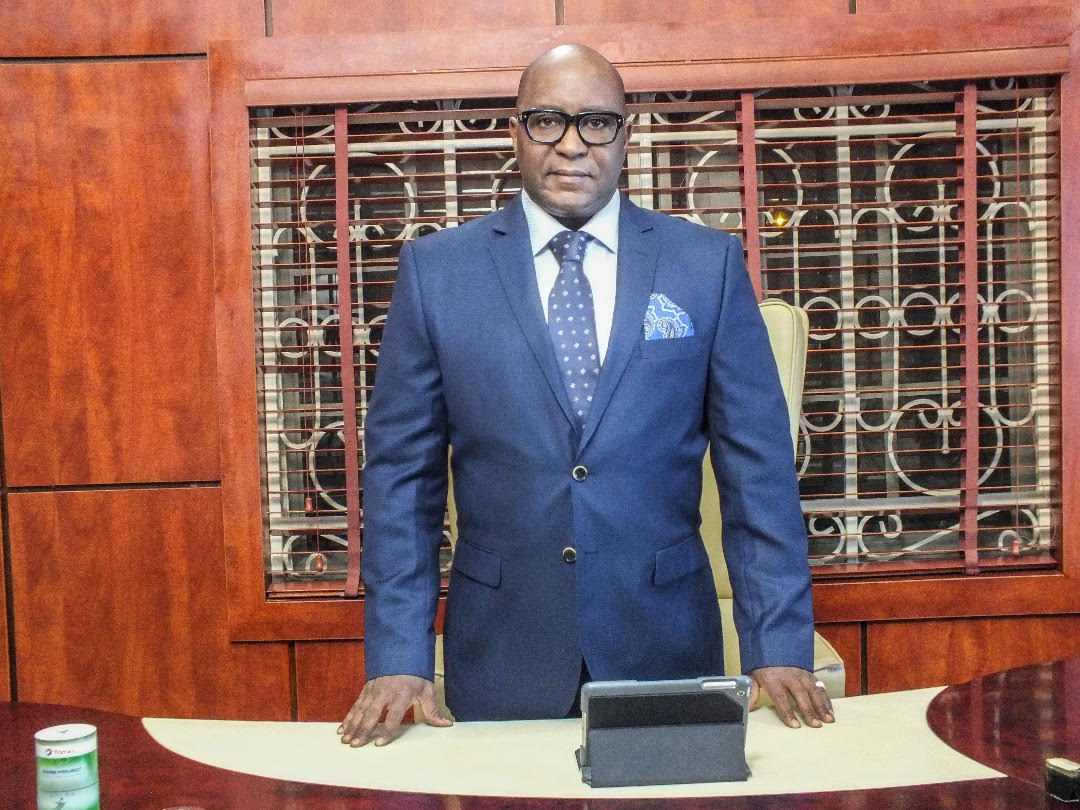 “It is not in the pursuit of happiness that we find fulfillment, it is in the happiness of pursuit.” Denis Waitley

Taking a cue from Waitley, it is safe to say since the soul is the power and core of who one is, fulfillment is therefore the feeling of being happy and satisfied with one’s life because of interesting, useful, or important things embarked upon.

Alhaji Awwal Garba is a major player in the global oil and gas sector whose sense of fulfillment is succinctly summed up in the above analogy, as his life for a long time, has been dedicated to meaningful and oftentimes sacrificial commitments to his fatherland as well as to the lives of his countrymen.

With particular interest in Nigeria, Alhaji Garba has been discovering untapped resources within the oil sector upon which he has over the years, successfully built his chain of business interests, under the Magma Group, thereby immensely contributing to the economic growth and development of Nigeria.

With a humble mien, a virtue instilled by his upbringing, Alhaji Garba is a highly self-motivated person with an unbridled and a fervent desire to change the oil and gas sector narratives in ways that will benefit indigenous players and the Nigerian youths.

His words; “I was motivated into the sector by the desire to make a change, especially in the upstream sector of the industry where it is believed that only the oyibos (foreigners) hold sway therein.

“Of course, also in that direction would be the desire to contribute one’s quota to the national economy, in terms of creating jobs, which of course would help in giving the youths a sense of worth and direction.”

Born into a family of affluence, Alhaji Garba may well be said to have grown up being fed with a silver spoon. His late father, a traditional title holder ‘Talban Kano’; a king maker, was also an astute businessman, with wide spread interests in commodity trading, exports and imports. It may not be out of place to say that Alhaji Garba cut his entrepreneurial teeth under the tutelage of his father.

However, with strict and disciplined parents, adherence to what is right was the only rule, and this helped in shaping his character and personality, which he himself admits was the greatest gift he received as a child.

“I thought my parents were being hard on us as children, but I have come to appreciate all those moments later in life. It actually made us humble, yet strong. This was the best gift I received as a child because it helped in shaping my character.”

The desire to discover himself spurred him to break away from the comfort and sureties that being under the umbrella of his father provided.

According to him, “I can say that I was born into privilege, but that did not stop me from finding my own niche. The most difficult thing was finding a balance by breaking away from my father’s umbrella in order to find myself. I call it the period of soul searching. It took time to find what makes me tick, and since then, it has become a passion to reach out to greater heights. More importantly, I have worked hard to create and maintain it. And I am still working hard.”

A Member of the Nigerian Institute of Management (NIM) and a Member of the Chartered Institute of Business Management UK, Alhaji Garba also acquired a Master’s Degree in Business Economics in the UK.  He has in practice been a major player in the oil and gas sector of the global business environment, with particular focus in Nigeria, since gaining his Master’s degree.

Awwal Garba is a man with very strong instincts which, interfaced with his realities have enabled him make life-changing decisions. One of the difficulties he had was deciding whether to go into private or public service. Looking back at the years of successful business entrepreneurship, his instincts to go for the former paid off handsomely, although from hindsight, it is clear to see that should he have chosen the latter, he still would have been profoundly successful.

A global oil and gas business mogul, Garba is an entrepreneur with an innate ability to sniff out business opportunities where many cannot; a rare disposition which has enabled him to excel in countless ventures and investments, especially within the oil and gas sector.

Garba’s major areas of focus cut across sectors like, Telecommunications, Power, Finance, Management Consulting, Marine, Oil and gas Exploration and Production (OEP), oil refinery and real estate development, among others.  He is a consummate professional with strong interpersonal and effective communication skills, integrity, tenacity and strength of character.

Awwal Garba’s core area of specialization in the oil and gas field is Exploration, with eight assets so far. He is building a 100 thousand barrel refinery in Akwa Ibom State at the moment, on a hundred hectare land, close to Exxon Mobil, while also negotiating with 3 marginal oilfields from oil mill 370 with Exxon Mobil.

“In the gas area of the sector, we have made proposals with respect to the Brass LNG, into which my partners and I are ready to commit $1bn. This would cut the issue of oil importation and also provide 300,000 jobs for skilled and unskilled workers in Akwa Ibom.”

“We have H-Oil Limited which has assets in Angola as well as South Sudan and Liberia, with offices in Paris and headquarters in Madrid, Spain.  Magma Logistics works with the Department of Petroleum Resources. We also have Magma Petroleum Investment in the downstream sector with our downstream partners, having facility in Amsterdam and distributing finished products all over the world.”

With this wide spectrum of business concerns, there are bound to be challenges. These however, are usually viewed by the astute businessman in the context of growth opportunities.

“Today, what kills the exploration business is greed. Many want to have everything and there’s no way you could do that when it comes to exploration.  We engage partners from all over the world and our logic is that ‘half bread is better than none’. We can give out an asset with 5% interest, an asset with 2%, it does not matter. What matters is that when you multiply the 2% x 10, you get 20%. This is our logic.”

It is not really commonplace to find the virtue of humility in the lives of many of the affluent. The life of Awwal Garba is a marked exception because it is the way he was brought up. Whether it was his father or friends of his father, who included the MKO Abiola’s, the Maitama’s and the Babangida’s, they all pointed to the importance of the virtue and instilled that in him. He also admits that life itself also taught him about humility.

“I mean all you have to do is to look around you. The seven-year-old selling sachet water or Moi-Moi on the streets of Lagos in the early morning rush hour could have been you. He, also given your opportunity, could perform as good or even better. There are always two sides of a coin.”

Alhaji Awwal Garba is a de-tribalised Nigerian who sees his country as his constituency. Through his investments, he has been building bridges.

A unique vehicle with which he is stoking the embers of patriotism is ‘Game Changer’, a media established to ensure  that the Muhammadu Buhari administration continues to change the whole game; from Agriculture, Corruption to Healthcare and very importantly, to unite Nigerians and give them a sense of belonging.

He uses Ghana as a yardstick in buttressing the importance of patriotism. “You will be shocked to realise the level of their patriotism. A taxi driver always has the Ghanaian flag in his cab as with every household, like it was in America perhaps before the Trump era when American schools taught American history, the need to be patriotic and love for country. So patriotism is very important. Game Changer is here to bring awareness about patriotism.”

His friends call him the preacher and this is not just based on his knowledge and adherence to the tenets postulated by the Quran, but because he never stops preaching the gospel of unity among Nigerians, believing in the oneness of the country as a pathway to wealth creation in a more sustainable way, strength and endless possibilities. No wonder his house is always like a beehive or a Mecca of some kind.

Garba sees leadership as the ability to see beyond tomorrow and to commit to that vision totally, when those around you follow you with absolute commitment even when they do not see what you see.

“Those who do not remember history are certainly bound to be consumed by it. It has happened in many countries before. The Asian tigers, from Singapore to Malaysia, Thailand to China, they have all gone through what we are going through. Mao Zedong closed up China for 50 years before opening up.  America’s democracy took over 200 years to get to where they are now. Ours is only 50+ and with such multi ethnic groups, patience is the key.”

Awwal Garba is a man with a heart of gold, compassionate, kind and in tune with his people. He believes in creating high-points in his life each day and one of those is the opportunity to make someone happy.

“There are just countless moments with that, but what you can do is to create one every day. Most importantly, put a smile on someone’s face and the picture stays with you permanently.”

It is not surprising then that he has been honored with the prestigious traditional titles of ‘Galadima Talban’, and ‘Talban Dan Hausa Daura’.

Alhaji Awwal Garba maintains a closely knit family even as a very busy person, understanding the importance of family. Despite his busy schedule, which has shrunken some social activities, he still finds time to spend with his family.

“The pressure of work increased with growth, so whatever time I can squeeze out now for personal issues, I spend it with my family. We take the children to game parks when they are on holidays and try to have a feel of their minds by coming down to their level and appreciating them. My biggest fear is not being able to meet up with the expectations of my family and my loved ones.”

Even though Awwal Garba a fulfilled man, he believes in breaking new grounds as long as life permits him.

“I feel fulfilled in life, all the time. Yet, life itself is like sweet nectar from the most beautiful thorny fruit bearing tree. Once you taste it, you cannot but go back for another bite. I am always setting new goals to conquer.”

As Eleanor Roosevelt aptly puts it, “Happiness is not a goal. It’s a by-product of a life well lived.”

It is from that standpoint that Alhaji Awwal Garba says,” I believe in what life has dished out my way and believe me when I say if I have to do it all over again, I would not change a thing.”

Indeed, there must be some unique feeling that comes with blazing trails and impacting lives.

The Biggest Barbeque Event in Lagos – Barbeque In The Park