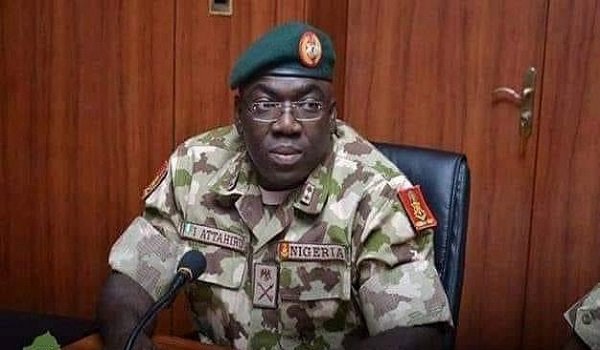 Chief of Army Staff Lt. Gen. Ibrahim Attahiru has urged troops of the Operation Lafiya Dole to be ready to end the Boko Haram insurgency.

The COAS spoke on Sunday at the Sector II Headquarters of Operation Lafiya Dole in Damaturu  as part of his operational visit to the Northeast.

He said he was proud of the success the troops had recorded with the Operation Tura Takaibango, adding that his visit was to motivate the soldiers.

“We have come to Yobe State to the sector headquarters to meet you, to get to know you and you get to know us as well. I am bringing a very special greetings from the President and Commander-in-Chief. He is fully briefed and aware of how and what you are doing.

“I personally as a Chief of Army Staff, I’m here to take cognisance and note of the challenges you have and ensure that they’re addressed to ensure you have the highest level of morale to be able to do your job and do it proudly as Nigerian Soldiers. I’m very pleased, your Commanders have told me what you have done collectively as part of ‘Operation Tura Takai Bango’, how you have pushed the Boko Haram Insurgents. We are so proud of you and I believe in the second phase of that operation you will do more.

“So, I’m sure you go out there and push them so hard and bring this entire insurgency to an end. All your challenges are noted and I will address all the problems, well done,” he    said.

Gen. Attahiru told reporters he was committed to addressing the challenges of the troop, noting that he has taken copious notes of the challenges and they will be addressed in a very short time.

The COAS inspected the ongoing construction of the 233 Battalion Barack, which was awarded about four years ago.

He expressed satisfaction at the speed of the work and promised that work at the barrack will soon be completed to enable soldiers to get decent accommodation.

Four members of the civilian Joint Task Force, including two of their leaders and some ISWAP members, were killed during an ambush on soldiers in Gudumbali, a village in the Kukawa Local Government Area of Borno State.

Sources who spoke to Channels Television said the military also recorded some casualties in the attack, but it is still not clear how many soldiers were affected as the military authorities are yet to confirm.

The military convoy was on ten gun trucks and on a patrol around Kauwa village heading towards Kukawa when they were ambushed by suspected Boko Haram insurgents.

According to sources, the ambush, which left scores injured, happened on Friday. Although it is unclear how many troops were killed, AFP reported that no fewer than 15 soldiers and four militia fighters in the state lost their lives.

The attack was the latest in a jihadist conflict, which has killed 36,000 people and displaced hundreds of thousands in northeast Nigeria since it began more than a decade ago.

“We lost 15 soldiers and four civilian JTF (militia) in the terrorists’ ambush in the forest near Gudumbali,” the source was quoted as saying.