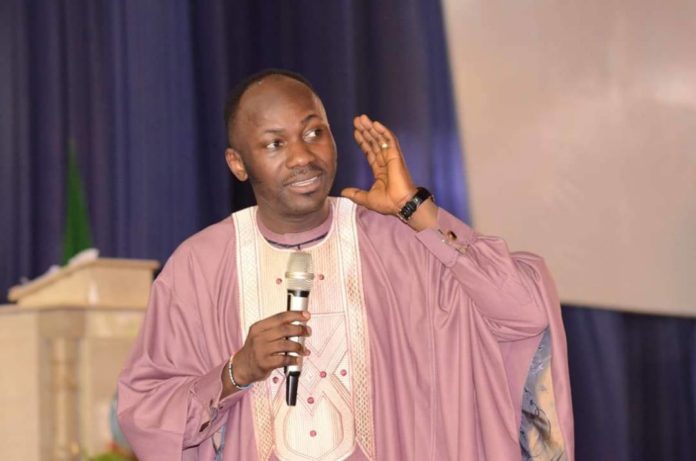 Man of God, Apostle Johnson Suleiman, the general overseer of Omega Fire Ministry has further buttressed one of the popular sayings of the greatest Indian nationalist, Mahatman Ghandi who believes there’s no point losing total faith in humanity. According to Ghandi, humanity is like an ocean; if a few drops of the ocean are dirty, it doesn’t make the entire ocean dirty.

This assertion came to fore when all efforts to appeal to well meaning Nigerians including the Lagos State government to save the plight of renowned prolific Idan Irawo producer, Kunle Agboola who’s been down with a chronic kidney disease proved abortive.

The dynamic Yoruba programme producer of Idan Irawo fame has been bedridden for months battling a chronic kidney disease and medical experts have advised for an urgent kidney transplant if he must live, but all efforts to meet the N14.8m medical expenses in an Indian hospital have been to no avail until the man of God came to his rescue recently.

According to sources, Apostle Suleiman has facilitated Kunle Agboola’s intention to travel abroad for further medical attention by paying for his flight ticket to the US with provisionof accommodation facility and the sum of $3000 cash as basic travel allowance-BTA.

The man who has been going through an excruciating pain for months, we gathered had reached out to the man of God whose passion for humanity is legendary for spiritual guidance and after a prayer session, the man of God asked him what he wants exactly of which he replied, sir, all I need is some fund to travel abroad for a medical treatment option in the US.

The man, Kunle Agboola told the Apostle how the response to a letter written to the Lagos State Government for support had further dampened his survival hope. According to him, he had hoped the State government will give him assistance in form of reduction in its dialysis facilities after officials at the State owned hospital had diagnosed him wrongly and later sent him out of the hospital premises, when his wife couldn’t bring money on time.

In an acknowledgement letter signed by the acting director, medical administration, training/programmes, Dr. A.A Fasawe on behalf of the State Government titled, Re: Appeal For Support For Our Media Friend, Mr. Kunle Agboola, the government bluntly and categorically refused to offer any assistance.

‘’I am directed to acknowledge the receipt of your letter addressed to His Excellency, the governor of Lagos State dated 11th January 2018 on the above subject. The ministry is concerned about Mr. Kunle Agboola’s present health status but unable to accede to your request due to budgetary constraints, Dr. Fasawe wrote on behalf of governor Ambode.

It was when the man of God got wind of his deteriorating predicament and plight of excruciating pain that he agreed to assist the ailing media practitioner to save a soul, ‘’we see people with such cases in our ministry everyday, even worse challenges but given his background and since his faith is on doctors, I have to support him.

In his words, Kunle Agboola thank the man of God, Apostle Suleiman for his prompt reaction to offer his shoulder to lean on at this critical time, ‘’It’s been tough, the pain has been indescribably tormenting, and the cost of dialysis which has to be trice every week has been so weighty on me that, my enemy almost gave up the ghost in one of the last nights before the Apostle stepped in, for now, I’ll be relying on free medical treatment abroad pending when the money for the transplant will be generated, on behalf of my family and friends, I thank Apostle Suleiman and good spirited souls God have used to make this possible most especially TiwanTiwa TV management which has been running the SoS campaign on my behalf, actress Mercy Aigbe and other donors. I am indeed very grateful,” he said.

OAU breaks away from ASUU