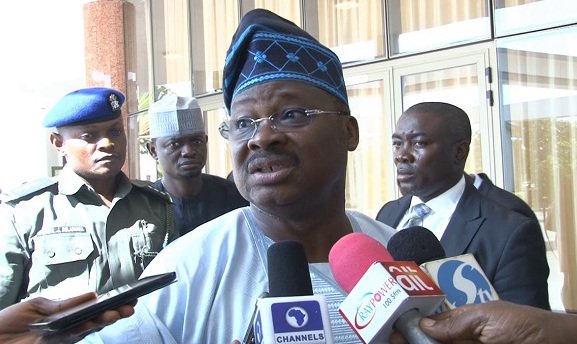 Governor Abiola Ajimobi of Oyo State on Tuesday enjoined the Minister of Communications, Barrister Adebayo Shittu and other aggrieved All Progressives Congress (APC) members in the state to explore the party’s internal organs to seek “redress rather than engaging in actions capable of further sowing the seed of discord within the party”.
Ajimobi, who gave this advice through a statement issued on his behalf by his Special Adviser, Communication and Strategy, Mr. Bolaji Tunji, declared that it became necessary in view of the utterances credited to Shittu and other aggrieved stalwarts of the party in the aftermath of the party’s ward congresses held at the weekend.

The governor told the jilted members “to explore the party’s internal organs for seeking redress rather than engaging in actions capable of further sowing the seed of discord within the party”.

As leaders and stakeholders in the party, the governor said “it would be counter-productive to engage in actions and utterances that tend to further divide the party, adding that he would on his own part continue to do the best for the state”.

Ajimobi said “In any case, Shittu should be the one that should be afraid of going to jail in view of many allegations made against him as minister. Few of these are his alleged illegally-acquired property in Ibadan and Abuja and sudden unexplainable and stupendous wealth not commensurate with his emoluments.

“In addition, his recent attempt to covert and appropriate a parcel of land belonging to Saki community, which was stoutly resisted by his own people, has shown his level of greed, avarice and penchant for appropriating what does not belong to him.

“Governor Ajimobi remains a distinguished Senator of the country who had successfully traversed the corporate world and got to the peak of his career as the Managing Director and Chief Executive of a multinational; a position that requires a high degree of integrity, ability and capability.

“All these attributes have reflected in the way he has successfully managed the affairs of the state in the last seven years, which has transformed the face and fortunes of the state and had attracted unmatched number of investors to the state.

“Similarly, Governor Ajimobi’s track record in his first term earned him an unprecedented second term, a feat for which he would forever remain grateful to the good people of the state.

“Something that cannot be taken away from Governor Ajimobi is his unrepentant commitment to the assurance of peace, safety and security across the length and breadth of Oyo State, which had hitherto been under the control of some erstwhile garrison commanders”.

Ajimobi added that, having consistently won elections over the years, he remained a man to be rivaled by politicians who were known to be serial election losers and now desperate to become the governor of the state where governance had been raised beyond the limit of people with mediocre ability.

Ajimobi said he has managed the affairs of the state prudently and with the fear of God, and will not be distracted from his well-articulated programmes of security, safety and peace as well as the developmental strides which the administration has been known for, until May 29, 2019 when he will hand over to a worthy, capable, seasoned and tested successor.

“Ajimobi remains the leader and father of the APC and will continue to work towards the success of the party at the state and national levels, and the progress of the state”, he added.