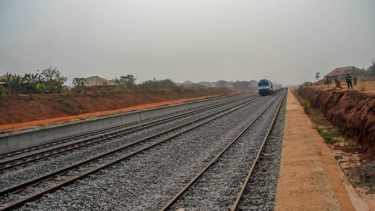 Minister of Transportation, Rotimi Ameachi, has said that 20,000 workers would be employed to work on railway stations along Kaduna-Kano modern railway.

Ameachi stated this on Thursday in Kano at the ground breaking ceremony of Kano-Kaduna railway line.

He said that the project would improve socio-economic activities within the corridor when completed.

This is a directive given by Mr President who said to me that I should make sure that we create employment.

He said that the project covers 203 kilometres double track standard gauge railway from Kano to Kaduna.

The minister said the rail line traversed Kaduna, Zaria and Kano cities, with three railway stations both for passengers and freight services at Rigachukun, Zaria and Kano, with varying capacities and categories.

He explained that the project, which was awarded to China Civil Engineering Construction Company, would be completed within 18 months.

According to him, the rail line would be provided with accessories and special installations including water supply, power, signalling systems and communication in GSM-R, freight yards, rolling stocks depots and maintenance workshops.

“The ministry will continue to work assiduously in line with Mr President’s directives, to implement all the corridors within the Nigerian Railway Modernisation project and aggressively expand the railway network,” he said.

In his goodwill message, the Chairman, Northern Governors Forum, Governor Simon Lalong, said that all northern governors would continue to support President Muhammadu Buhari to move the country forward.

“We are proud to be in Kano for the ground breaking ceremony. All governors are with you and will continue to support Mr President to leave a legacy.

“We prayed to God to continue to give you wisdom and strength to do what will benefit the country,” he said.

Also speaking, Governor Abdullahi Ganduje of Kano State commended the President for the development projects his administration executed in Kano State and the country at large.

He said he would follow the footsteps of the president in reflecting such efforts for the development of the state.

Ganduje said that the government did much on ensuring security of lives and property in the state.

According to him, that was why Kano was one of most peaceful states in the federation.

He called on the contractor to ensure quality job and complete it within the timeframe.

Dignitaries at the occasion include Governor Atiku Bagudu of Kebbi State, Ministers of Agriculture, Communication and Digital Economy, Police Affairs, Defence as well as Environment.

The Emir of Kano, Alhaji Aminu Ado-Bayero, other Emirs from within and outside the state, as well as diplomats also attended the event.

The Coming Of Kano-Kaduna Modern Railway And Its Social And Economic Significance By Garba Shehu, Senior Special Assistant to the President, Media and Publicity. Abuja.

Some Prophets See Nothing By Femi Adeshina