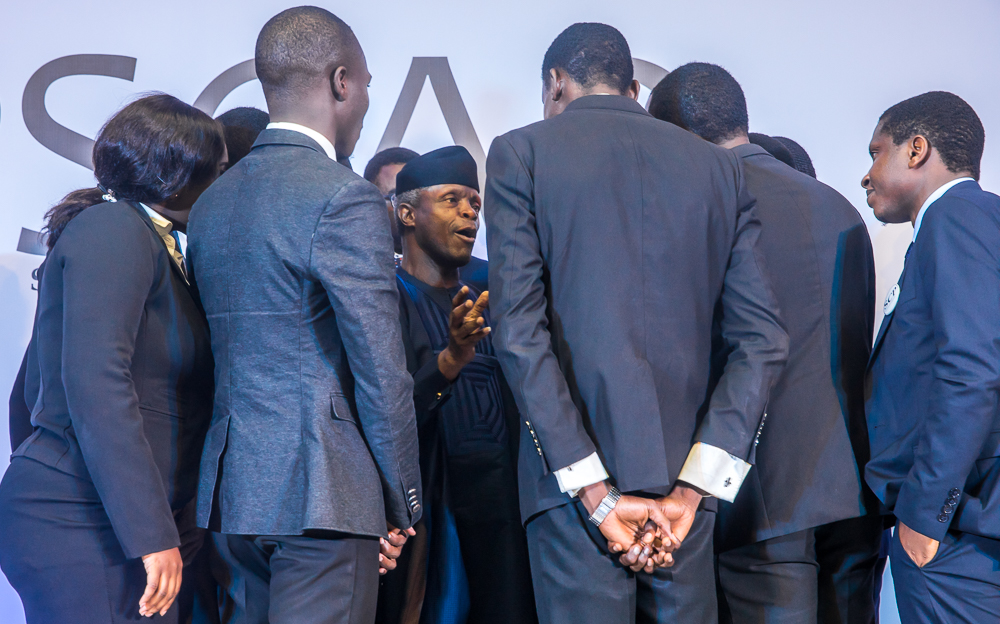 SimmonsCooper Partners, a leading national law firm formerly headed by Nigeria’s Vice President Prof. Yemi Osinbajo has given the PUNCH newspapers 72 hours to retract a story alleging that the firm was associated with or involved in an alleged N100 billion tax fraud by Alpha Beta Consulting Limited.

Dapo Akinosun, the law firm’s managing partner, in a statement on Thursday stated that if the PUNCH ignored the ultimatum, then it will face legal actions for defamation and malicious falsehood.

Akinosun also vehemently denied that the firm has a link with the alleged tax evasion, money laundering, nor corruption claims against any of the corporations identified in the Publication.

He further stated that SimmonsCooper Partners has never been retained by Ocean Trust Limited to offer secretarial services as alleged by Punch Newspapers.

Akinosun disclosed that Osinbajo was a “one time senior partner” of the law firm who resigned from the firm upon his election as Vice President of the Federal Republic of Nigeria, in line with international best practices.

“SimmonsCooper Partners is a product of the combination of her members’ intellectual capital, industry and integrity garnered for several years. We are proud that Professor Osinbajo continues to epitomize these values even in public service,” part of the statement read.

The full text of the release:

“SimmonsCooper Partners’ (“the Firm”) attention has been drawn to certain allegations, assertions and other false accusations made against her in the front page of the Punch Newspapers of July 13th 2019, titled “Osinbajo’s firm linked to company fingered in alleged N100bn Alpha Beta scam” (“the Publication”);

For the record, SimmonsCooper Partners refutes all the false allegations imputed against the firm, her members and persons currently or previously associated with the firm. The Publication singled out, not only SimmonsCooper Partners, but also Professor Yemi Osinbajo (SAN) (GCON), a one-time senior partner and member of the firm, for public opprobrium.

The Publication contains untrue and highly defamatory statements towards the firm, some of which contain malicious falsehood.

In doing so, defamatory statements are being communicated to millions of people throughout the world, diminishing the firm’s reputation and that of various individuals who have worked at, and continue to work, at SimmonsCooper Partners.

SimmonsCooper Partners states that it is not involved, in any shape or form, neither does it have a link with, the alleged tax evasion, money laundering, nor corruption claims alleged against any of the corporations identified in the Publication.

For the avoidance of doubt, SimmonsCooper Partners has never retained a physical or correspondent address at “B5 Falomo Shopping Complex, South West Ikoyi, Victoria Island”.

This address is copiously portrayed in the published CAC Form 2.1, purportedly, as proof of the linkage between the firm and the subject matter of the allegations, whereas, a cursory inquiry by PUNCH could have shown that this address is neither the firm’s registered address nor its principal office.

The firm categorically states that it has never been retained by Ocean Trust Limited to offer secretarial services as alleged by PUNCH Newspapers or at all. As is custom with filings as Company Secretary, there is no acceptance letter by the firm consenting to the purported appointment, or any other filing undertaken by the firm as Company Secretary at the registry of the Corporate Affairs Commission.

The Publication seems designed to damage the reputation of SimmonsCooper Partners and its past and current members rather than have any fair comment basis.

The Publication was a false statement of fact, intentionally published in print and on the Internet, to millions of people within Nigeria and around the world.

The malicious intent is demonstrated by the fact that a public search at the Corporate Affairs Commission shows that Ocean Trust Limited has a subsisting company secretary that had been appointed since 2011, which fact was curiously left out by the PUNCH Newspapers in the Publication.

We believe that the PUNCH Newspaper’s admission to “rush to press” with the Publication, was motivated by malice and calculated to cause harm to the firm and its past and current members.

Further, the imputation that offering professional services to a company, by itself, creates an association with alleged wrongdoing, is neither customary nor reasonable.

We are certain that PUNCH Newspapers has external legal advisers who will not be taken to be privy to, or actors in, the defamation alleged herein, or indeed in other matters of liability that may arise in the course of running PUNCH’s business.

Offering professional services, by itself, cannot be characterized as wrongdoing.

The insinuation that the firm, its past and current members are somehow associated with alleged tax evasion, corruption, the suppression of investigation and obstruction of justice is not only unjustifiable and unreasonable, but also malicious in intent.

Without more, the Publication has definitely held the firm up to scorn, ridicule, disgrace, and contempt in the minds of the readers of the Publication.

SimmonsCooper Partners, today, is a product of the combination of her members’ intellectual capital, industry and integrity garnered for several years.

We are proud that Professor Osinbajo continues to epitomise these values even in public service.

In line with international best practices, upon his election as Vice-President of the Federal Republic of Nigeria, Professor Osinbajo resigned his membership of the firm.

The firm is aggrieved by the wanton, mischievous and most unprofessional manner in which the PUNCH Newspapers has published the defamatory statements in the Publication.

SimmonsCooper Partners intends to seek redress to the fullest extent available in law and has requested the PUNCH Newspapers to do all of the following:
• remove from publication in their entirety the defamatory publication and all online threads to prevent further harm to the Firm’s business;

• produce an apology and a declaration that the allegations referred to are false and defamatory and cause such apology and declaration to be published in each of the forums which have given or could give reason for our complaint (such apology to be approved by us prior to publication);

• provide details of the number of online posts made, together with website addresses;

• make proposals for the payment to us of damages for the harm caused to our reputation; and

• undertake to actively monitor and delete any newly published defamatory content relating to the Firm.
If the defamatory Publication and threads are not permanently removed and the above undertakings are not complied within the stipulated period, SimmonsCooper Partners reserves the right to undertake further action as appropriate”.