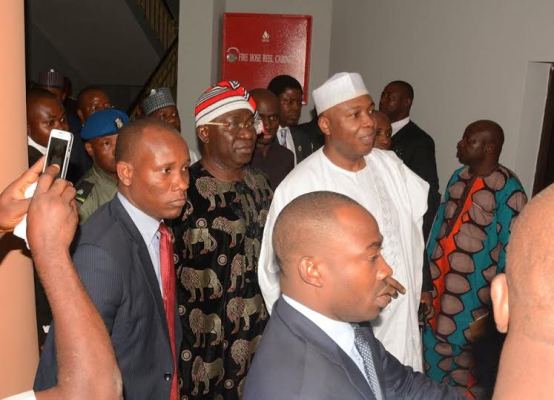 President Muhammadu Buhari and the President of the Senate, Bukola Saraki, on Monday kicked off an open war of words following the arraignment in court of the senate president and his deputy, Ike Ekweremadu, for alleged forgery of the rules of the upper legislative chamber.

Messrs Saraki and Ekweremadu were charged for alleged conspiracy and forgery of Senate Standing Rules with which the Senate presiding officers were elected and inaugurated on June 9, 2015.

Also charged were the former Clerk to the National Assembly, Salisu Maikasuwa and his deputy, Ben Efeturi.

All four were granted bail by Justice Yusuf Haliru of the FCT High Court after meeting the conditions.

Mr. Saraki was the first to fire a salvo at the presidency when he, shortly after leaving court, alleged that “a government within government,” had effectively taken control of the Buhari administration.

Before the open confrontation both the president and the senate president had largely used proxies in the titanic political battle that has dragged on for over a year now.

In a statement he personally signed, Mr. Saraki said the charges of forgery pressed against him and other alleged conspirators represented “another phase in the relentless persecution of the leadership of the Senate.”

He said there had been some forces who had hijacked the apparatus of Mr. Buhari’s executive power to pursue “nefarious agenda”.

“This misguided action by the Attorney General begs the question, how does this promote the public interest and benefit the nation?” he said.

“At a time when the whole of government should be working together to meet Nigeria’s many challenges, we are once again distracted by the Executive Branch’s inability to move beyond a leadership election among Senate peers. It was not an election of Senate peers and Executive Branch participants.”

The embattled senate president said over the years, the senate had worked to foster good relationship with the executive branch and that was informed by the collective interests of all to put aside divisions and get on with the nation’s business.

“We risk alienating and losing the support of the very people who have entrusted their national leaders to seek new and creative ways to promote a secure and prosperous Nigeria,” Mr. saraki said.

“As leaders and patriots, it is time to rise above partisanship and to move forward together.

“However, what has become clear is that there is now a government within the government of President Buhari who have seized the apparatus of Executive powers to pursue their nefarious agenda.

According to him, “This latest onslaught on the legislature represents a clear and present danger to the democracy Nigerians fought hard to win and preserve.

“The suit filed on behalf of the Federal government suggests that perhaps some forces in the Federal Republic have not fully embraced the fact that the Senate’s rules and procedures govern how the legislative body adjudicates and resolves its own disputes. ”

Stating further, Mr. Saraki said he was confidence of survival, adding that he was ready to be jailed as a price for his “refusal to surrender to the subversion of our democracy and the desecration of the Senate.”

He added, “Let it be abundantly clear, both as a citizen and as a foremost Legislator, I will continue to rise above all the persecution and distraction that have been visited on me.

“In the words of Martin Luther King Junior ‘the ultimate measure of a man is not where he stands in moments of comfort and convenience, but where he stands at a time of challenge and controversy”.

The senate president said he would remain committed to the responsibilities that his citizenship and his office imposed on him.

He said, “I will remain true and committed to the responsibilities that my citizenship and my office impose on me. Without doubt, the highest of those responsibilities is the steadfast refusal to surrender to the subversion of our democracy and the desecration of the Senate.

“This is a cross I am prepared to carry. If yielding to the nefarious agenda of a few individuals who are bent in undermining our democracy and destabilising the Federal government to satisfy their selfish interests is the alternative to losing my personal freedom, let the doors of jails be thrown open and I shall be a happy guest.”

In his reaction, Mr. Buhari said he regarded Mr. Saraki’s claim of a “government within government” as nothing but calling him a stooge.

“This claim by Senator Saraki would have been more worth the while, if it had been backed with more information,” the president said in a statement entitled “Saraki and the Cabal,” by his Special Adviser, Media and Publicity, Femi Adesina.

“If he had proceeded to identify those who constitute the “government within the government,” it would have taken the issue beyond the realm of fiction and mere conjecture.

“But as it stands, the allegation is not even worth the paper on which it was written, as anybody can wake from a troubled sleep, and say anything.”

Stating that the Attorney-General of the Federation is the Chief Law Officer of the state, the statement said it was within his constitutional powers to determine who had infringed upon the law, and who had not.

“Pretending to carry an imaginary cross is mere obfuscation, if, indeed, a criminal act has been committed. But we leave the courts to judge.

“To claim that President Buhari is anybody’s stooge is not only ridiculous, but also preposterous. It is not in the character of our President.”

Also in a statement by his media aide, Uche Anichukwu, on Monday, Mr. Ekweremadu urged those in power not to use the law as an instrument to “bludgeon innocent citizens into submitting to the untamed wishes and caprices of witch-hunters.

According to him, his trial would afford Nigerians to see clearly that the charges preferred against him were “nothing but meretricious thrash”, adding that democracy was not military rule.

In an unveiled declaration of his innocence and certainty of victory over his persecutors, the deputy senate president said, “For me, I find great comfort in the immortal words of late Dr. Nnamdi Azikiwe who said that history will vindicate the just and the wicked will not go unpunished.”

Insisting that his trial is political and puts democracy in grave danger, he further said: “Let us make no mistake about this: it is not Senator Ike Ekweremadu or Senator Bukola Saraki or the other accused persons that are on trial; rather the hallowed democratic principles of separation of powers, rule of law, the legislature, and indeed democracy itself are on a ridiculous trial.

“Mere anarchy is unleashed upon the land, but our courage must not fall apart. No condition is permanent and nothing lasts forever.”

The Deputy President of the Senate said as a law-abiding citizen and a firm believer in the rule of law and all the rights and privileges it advertises.

“It is only in my place not to commit crime, but way out of my reach not to be accused of one, especially when instruments of power become apparatuses for oppression of the innocent and voices of opposition.”

He added, “Indeed, I, in no way or fashion, claim to be above the law, just that I believe that the law should not be used as an instrument to bludgeon innocent citizens into submitting to the untamed wishes and caprices of witch-hunters.

“However, I put my trust in God, the court, and the overwhelming solidarity of the good people of Nigeria. When the dust settles, Nigerians will see clearly that this charge is nothing but meretricious thrash. Time, occasions, and provocations like this will teach their own lessons.

“I hope that one chief lesson will be that democracy differs markedly from military rule and that public officer should never subvert the foundations of democracy by prioritizing the rule of man over the rule of law.”

But before today’s arraignment, the Senate had fired blistering remarks at the Presidency, accusing the Buhari Administration of plotting to muzzle the legislature effect and leadership change in the National Assembly and constituting imminent danger to democracy.

It also halted the process of screening ambassadorial nominees, accusing the executive arm of irregularities.

The senate subsequently summoned the Secretary to the Government of the Federation, Babachir Lawal, and Minister of Foreign Affairs, Geoffrey Onyeama, to explain the said irregularities.

Alleged Forgery: I am ready to go to jail – Saraki