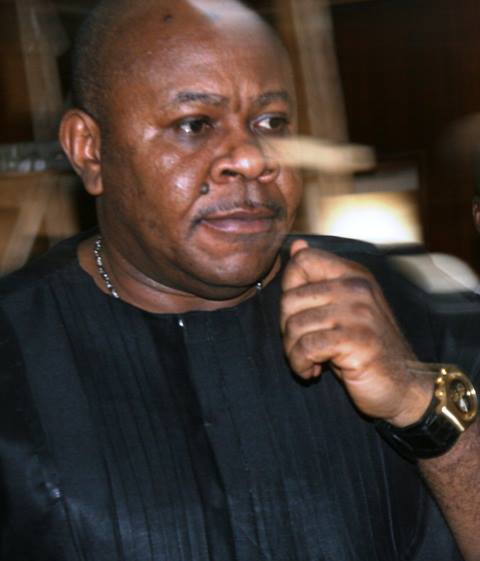 Ishaya Bamaiyi, a former Chief of Army Staff, on Monday, told an Ikeja High Court in Lagos how an alleged serial conman, Fred Ajudua, allegedly defrauded him of $8.4 million.

Mr Bamaiyi said that the alleged fraud occurred while both of them were both incarcerated at the Kirikiri Maximum Prisons in Lagos.

The News Agency of Nigeria (NAN) reports that Mr Bamaiyi gave the narration while being led in evidence by EFCC counsel, Seidu Atteh, in a lengthy testimony which lasted from 9.42 a.m. to 3.15 p.m.

He said: “On November 3, 1999, I was arrested and sent to Kirikiri Maximum Prisons for the alleged murder of Kudirat Abiola. I was at Block 2 which was said to be for Very Important Personalities (VIPs).

“Fred Ajudua and Ade Bendel were brought to the same prison but on different days. We became friends as inmates and discussed my case from time to time. As a lawyer, he asked me to give him information on my case and I obliged, I brought the file and he studied it and said I really don’t have a case as it is strictly ethnic and political case.

“He promised to do something about it and said he will send his wife who is also a lawyer to see Hon. Justice Alabi, the then Chief Judge (CJ) of Lagos.

“He later informed me that his wife had met with the CJ and Prof. Yemi Osinbajo, the then Attorney-General of Lagos State. Ajudua advised that I look for a senior lawyer who must not be a northerner and he recommended Chief Afe Babalola (SAN).

“According to him, Babalola was close to Obasanjo, the president at that time. After some time, his wife visited and informed us that because of the nature of the case, it was going to be expensive.

“Ajudua’s wife said the then CJ said that Babalola said that he will charge $15 million and I told her I could not afford such an amount.”

The former Chief of Army Staff said the topic was not broached by Ajudua for a while and that Ajudua told him that he had friends who will help raise funds for Bamaiyi’s legal representation.
“I asked him how will I refund the money? I told him I had some funds and colleagues who will assist me in raising the money but they did not want their names mentioned.

“When my friends were assured of their privacy, many of them brought the money to me in the prison and I handed it over to Ajudua’s representative,” Mr Bamaiyi said.

Mr Bamaiyi said that he was initially sceptical about the transaction but his initial doubts were erased by Ajudua who swore on the life of Bobo, his only son and Bendel who had purportedly become a devout Christian.

“The defendant said he had only one son called Bobo, he swore to me that if he cheated me, that God should take the life of his only son, Bobo.

“My Lord because of that I believed him because I cannot swear with any of my children, no matter what.

“Bendel told me that he had stopped doing 419 and I believed him because he had started building a church at the Kirikiri Maximum Prisons and he was preaching there.

“This made me believe both of them,” he said.

Mr Bamaiyi told the court that Mr Ajudua informed him that Justice Ajayi, the then Lagos chief judge, had directed that Mr Babalola’s professional fees should be paid through Justice J. O. K Oyewole and that Mr Oyewole’s registrar will visit them in prison.
The retired general went on to give details of how he gave the first tranche of money alleged to be Mr Babalola’s professional fees to Ronke Rosulu, Mr Oyewole’s Registrar.

“Ronke visited us twice in October 2004. The first visit was on October 6, 2004. It was the defendant who brought her to the Visiting Room where we sat down and she confirmed she was sent by Justice Oyewole.
“On the second visit, Ronke came with her daughter whom she said was in the university. This visit was conducted by ACP Garba, the prison officer in charge of the visit.

“Her third visit was on November 20, 2004. This time she came with one Jonathan, the defendant’s boy that I knew in prison. This time the defendant did not come to the Visiting Room and the visit was also conducted by ACP Garba.

“Ronke, Jonathan and I counted the money in the presence of ACP Garba the prison officer. When I was seeing Ronke and Jonathan off, I met the defendant waiting for them by the corridor and the three of them went downstairs and I went down to the visiting room.

“My Lord, that was the first release date of the money I made which was on the instruction of the defendant.”

Mr Bamaiyi informed the court that he had made subsequent releases to Ajudua at various times while Ajudua was in prison, on admission at the Lagos University Teaching Hospital (LUTH) for an undisclosed ailment and while he was also on bail.

He said the funds were handed over to Ajudua, Jonathan or Bendel via his wife Imuade, his son, his ADC Major Chechet, his orderly Mr Mohammed Tatda at the prison premises or at LUTH.
Mr Bamaiyi also informed the court that he kept meticulous records of all the transactions in his handwritten prison diaries of 2004 and 2005.

The dairies were presented to the court by Mr Atteh, the EFCC counsel and marked as exhibits.

Mr Baimayi reading from the entries in the diaries revealed that in 2004, Mr Ajudua allegedly fraudulently received money six times from him and received money from him 19 times in 2005.

Revealing the last time Mr Ajudua fraudulently received money from him, he said “The defendant came to Kirikiri Maximum Prisons and collected $20,000 from me.

“He said it was the balance of the payment for Afe Babalola professional fees, this is the last time he collected money from me.”

Mr Bamaiyi said the money was received by Mr Ajudua after visiting hours in the prison. He also revealed to the court the various antics deployed by Mr Ajudua to fuel the alleged scam.

“My Lord, there was a time I got worried because I was not hearing from Afe Babalola; Ajudua was on bail and he came to see me with one Barrister Richard Oma. Richard said he came from Chief Afe Babalola’s Chambers.

“Unfortunately, he did not come with any official letter from Chief Afe Babalola.

“The DCP in charge of Maximum Prison DCP Ukobi said the defendant was coming to see me after visiting hours, the defendant came with one Kenneth who claimed he was a secret service officer.

“Kenneth said he was sent to see me by the National Security Adviser Lt.-General. Aliyu Gwaso, he said that Chief Babalola and the then President Obasanjo discussed my matter and he was sent to advise me not to cause any trouble for the government.

“I told him I did not have any problem in that respect as I did not commit any offence, he told me to write an undertaking and I told him I won’t. When he insisted I told him he should draft it for me and if I’m satisfied I will sign.

“He said he would draft the undertaking and bring it back to me but I never saw him again My Lord, ” he said.

Mr Bamaiyi said that following his enquiries about his promised legal representation from Afe Babalola, Mr Ajudua told him that he was waiting for a counsel from him so that Ajudua and Bamaiyi’s counsel will have a meeting with the SAN.

“My counsel, the then Barrister Y. C Mikyau, who is now a SAN, came from Abuja and for two days he did not see the defendant and had to return to Abuja.

“After that incident, I could not get in touch with the defendant again because I was told he went to Israel for a medical checkup.

“My Lord, I fell sick in the Maximum Prison and I was also treated in LUTH in March 2006, when I was in the hospital one Gabriel who was assisting the defendant while he was in prison came to me and managed to give me Ajudua’s number in India.

“I called the defendant and I confronted him saying that Hon. Justice J. O. K Oyewole did not receive any money from Ronke, Jonathan or any other person.

“He responded that the Honorable Judge could not have said that and that he will call me later.

“After that My Lord, I never got across to him again, maybe he changed his number because the number never went through. I never heard from him until about six years later when he was arrested,” Mr Bamaiyi said.

The former Chief of Army Staff reiterated to the court how he sourced the funds he allegedly lost to the scam.

He said: “My Lord as mentioned earlier, most of the money I got were from friends, colleagues, relations and well-wishers who pleaded with me not to identify them as some of them were in government.

“The other sources were from my farm products, I’ve been a farmer since 1984 when I was in service, I do different things on my farm, I grow cotton, soya beans and I’m also involved in animal husbandry.

“My Lord, I was posted to Lagos since 1986 and I remained in Lagos till my retirement in 1999. I was able to acquire some property, two duplexes on Sanusi Fafunwa in Victoria Island which were allocated to me by the Lagos State Government.

“I went into an agreement with HFP, a construction company who developed the two duplexes and rented it for six years and returned them to me, I sold these duplexes.

“My Lord, these were the sources of the money,” Mr Bamaiyi said.

He told the court that following Mr Ajudua’s arrest by the EFCC, his family through Mr Ajudua’s wife called Princess, his sister Gina, their counsel Mr Alex Agbaka, had tried to settle the matter out of court to no avail.

He noted that in two instances he was offered $2 million and $2.5 million by the family but rejected the offer stating that he needed a full refund of his money.

Justice Josephine Oyefeso adjourned the case until December 20 for cross-examination of Mr Bamaiyi.