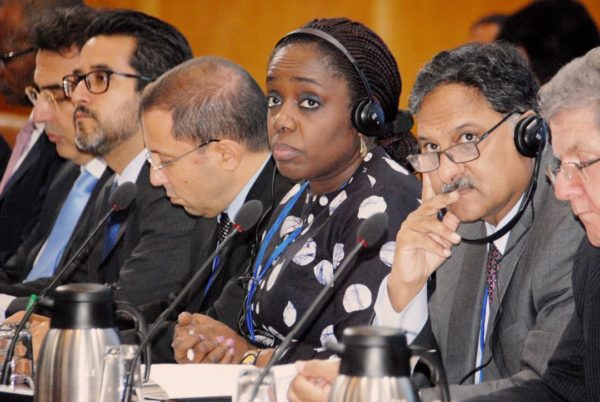 They were not scheduled to attend the Nigeria-US Investment Summit because they had other engagement at the IMF which coincided with their official engagement.

The duo replied the Emir of Kano, Alhaji Muhammadu Sanusi, and gave reasons for their absence at the summit which held on Saturday.

The summit was organised by the Embassy of Nigeria in the United State and the absence of Adeosun and Emefiele sparked criticism from the Emir, who described the absence of government officials as carefree attitude to investment opportunities.

The minister and CBN Governor on Sunday said they never confirmed attendance at the summit.

They said the meeting was not included in their schedule.

“I attend the IMFC which is the highest decision-making body of the IMF. My primary role here as well as having the Nigerian hat on is to represent 23 African countries. So one of the things I have to do is to issue a statement on behalf of those 23 which includes most of the Anglophone countries: South Africa, Mozambique, Tanzania,” Adeosun said on Sunday.

“So, my primary role here, as well as having a Nigerian hat on is to represent the 23 African countries. There has been some controversy about the scheduling I wasn’t due at any event.

“I was here as a governor of the IMF and member of IMFC to represent those 23 African countries and that schedule is what I must adhere to,” Adeosun explained.

Emefiele said a plenary session of IMF finance ministers and Central Bank Governors was holding at the same time of the event.

Emefiele said the meetings in the IMF as well as the meeting at the World Bank takes pre-eminence over the investment summit. He added that he wasn’t consulted when the programme was organised.

“Being the governor of the CBN what takes pre-eminence is the meetings in the IMF as well as the meeting at the World Bank. I think it is important for me to say this when I arrived in Washington, the officials of the embassy spoke with me that there was going to be a US-Nigeria summit and I said will check my schedule because I wasn’t consulted when this summit was being organised.

“What one would have expected is that they would have checked my schedule and that of the finance minister if they thought that our presence at the summit was very necessary,” he said.

Emefiele apologised to the investors and noted that himself and the Minister of Fianace are not irresponsible people.

“There was no way how the minister of finance and myself could have been at those meetings.”

“We are not irresponsible people and please we apologise to those investors who had gathered at the Nigerian embassy for the summit. My apologies but I know we also held some side meetings with some investors and there will always be lots of opportunities to meet with them.”

The Emir of Kano, Muhammadu Sanusi II, had expressed disgust over the absence of the Vice President, Yemi Osinbajo and other Ministers at Washington Investment Meeting.

“We had a meeting today with investors. We came in, then they trooped into the Ambassador’s office to sit down, while investors were waiting,” he said.

“We had a list of people who were in town. The Vice President, some ministers, were in town, they haven’t come up.”

According to the Emir, government officials who ought to have graced the event were conspicuously absent, raising worries that Nigeria might lose investment opportunities by their absence.

Sanusi, a former governor of the Central Bank of Nigeria (CBN) feels that the ministers’ absence could jeopardise Nigeria’s efforts to attract investment opportunities into the country.