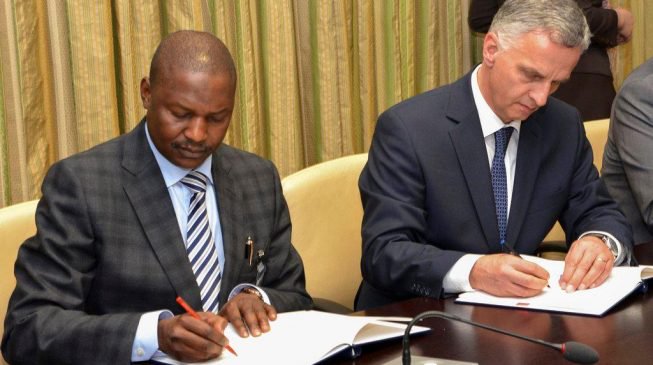 Oladipo Okpeseyi and Temitope Adebayo, two Nigerian lawyers hired for the return of $321 million Abacha loot from Switzerland, have been secretly paid their controversial fees, TheCable can report.

Although they were initially to be paid $17 million, it was cut by $2 million and paid following pressure from a very popular Lagos-based pastor who is a political associate of President Muhammadu Buhari.

Adebayo, one of the beneficiaries, confirmed the payment in a telephone interview with TheCable.

Hassan Dodo, director of information at the ministry of finance, and Ahmed Idris, accountant-general of the federation, did not pick calls and were yet to respond to messages from TheCable seeking further information on this development.

Presidency sources told TheCable that the pastor mounted enormous pressure on the president, claiming that the lawyers had spent “a lot of money” in trying to get the Swiss authorities to return the money to Nigeria.

TheCable had sent a freedom of information (FOI) request to Abubakar Malami, the attorney-general of the federation (AGF), requesting for the various agreements that were signed with the Abacha family, the Swiss lawyer and the Nigerian solicitors by his office.

Instead of responding, Malami filed a libel suit against the newspaper.

TheCable had raised the alarm on the duplication of legal fees in the recovery of the $321 million from Switzerland.

The federal government had engaged the services of Enrico Monfrini, a Swiss lawyer, in 1999 to help trace, identify, freeze and recover all looted funds traced to Sani Abacha, Nigeria’s military ruler from 1993 to 1998.

After seven years of work, including investigations and litigation across various countries, Monfrini had traced and recovered $321 million from Luxemborg banks.

The funds were domiciled with the government of Switzerland in 2014 pending a final request for transfer from Nigeria.

Monfrini and other lawyers involved had also been paid their fees, with the Swiss getting about $12 million.

However, Malami, rather than write directly to the Swiss authorities to seek the transfer of the funds to Nigeria, engaged Okpeseyi and Adebayo for the purpose.

They have now been paid $15 million as “professional fees” for writing the letter — more than the Swiss lawyer who traced and recovered the funds over a period of seven years.

Okpeseyi and Adebayo were both members of the Congress for Progressive Change (CPC), the party founded by Buhari to contest in  the 2011 presidential election. Malami was the legal adviser to the party.

‘WE WORKED HARD FOR THE MONEY’

In their defence, Okpeseyi and Adebayo said they deserve their fees having “perused loads of documents to ascertain status of the matters assigned to us”.

They also said they travelled to London to hold meetings with lawyers familiar with the status of the assets and to engage lawyers licensed to practice in the jurisdictions covered by their instructions.

According to them, they engaged the law firm of BCCC attorneys-at-law to take steps towards ensuring the repatriation of the Luxembourg fund through a power of attorney.

Their attorneys travelled to the Canton of Geneva and met with the Swiss authorities, according Okpeseyi and Adebayo.

Finally, the Nigerian lawyers wrote a letter to the attorney-general of Switzerland — effectively the only thing required of the AGF from the beginning — and the money was returned to Nigeria.

They then asked to be paid 5 percent of the repatriated loot as contained in the agreement signed with the AGF. The lawyer who did the actual recoveries across various jurisdictions got 4 percent.

In a series of interviews with TheCable, Monfrini had maintained that the engagement of new lawyers was needless as he already completed the recovery job and all that was left was for Malami was to “write a letter to the Geneva attorney-general or the government of Switzerland requesting the money to be paid back to Nigeria.”

He added that such activity is not to be developed by lawyers but only through government-to-government communication.

Defending the payment, Adebayo had argued that Monfrini didn’t complete the recovery job because the money was still in Switzerland.

Kemi Adeosun, former minister of finance, initially refused to approve the payment to the lawyers – she, however, later came under pressure to deny stopping it.

Vice-President Yemi Osinbajo, TheCable understands, had queried the request for payment when he was acting president, asking Malami to come and justify it.

However, the matter is now beyond him with the intervention of the Lagos-based pastor.

Cable Newspaper Journalism Foundation (CNJF), a partner organisation with TheCable, had sent an FoI request to the AGF, asking for details of agreements between the federal government and the Abachas which led to the eventual withdrawal of the prosecution of Mohammed Abacha; and why another lawyers were appointed after Monfrini had completed the recovery job.

The AGF’s office, the custodian of the FOI act, received TheCable’s request on December 8, 2017, and is yet to respond more than a year – as against the demands of the FOI act (2011) that such request should be answered in seven days of receipt.

CNJF had since been in court seeking an order of mandamus compelling the AGF to make available the information and documents requested from its office pursuant to the FOI act.

Describing the payment as “height of injustice,” the house of representatives, in April, 2018 also set up an ad-hoc committee to carry out “forensic investigation” on the issue to unravel the circumstances surrounding the controversial deal.

The AGF, however, has continually frustrated the probe and many months after, the lawmakers are yet to get headway.

“Of course, the AGF is trying to frustrate the investigation,” a source at the national assembly had told TheCable.

“Their report was not properly submitted,” another source within the national assembly told TheCable.

“When you are asked to bring something, officially, by a constituted authority and you are putting lackadaisical attitude towards that request, it is like you are not happy with the whole thing.”

In September 2018, acting on a tip-off that the Nigerian lawyers were about to be paid, CNJF wrote the ministry of finance, and in its response, the ministry said it “does not have any information regarding any payment made to the solicitors”.

Following the decision of the government of President Goodluck Jonathan to prosecute the Abachas for money laundering in 2013, the family entered into a deal to return funds traced to them.

The monies were recovered and kept in the custody of the attorney-general of Switzerland, awaiting final return to Nigeria.

But the federal government did not repatriate the funds until Jonathan left power in 2015.

A letter of intent was signed by Nigeria and Switzerland in March 2016 under a new attorney-general to ensure the restitution.

Malami and Didier Burkhalter, Swiss foreign minister, signed the document on behalf of their governments.

“The signing of this letter of intent is an important step towards the restitution of the funds under the control of the World Bank, which was made possible by the confiscation by the Geneva prosecutor’s office of this amount initially held in accounts in Luxembourg,” a statement from the Swiss foreign ministry read.

Not much was heard about the $321 million again until October 2017, more than a year after the letter of intent was signed.