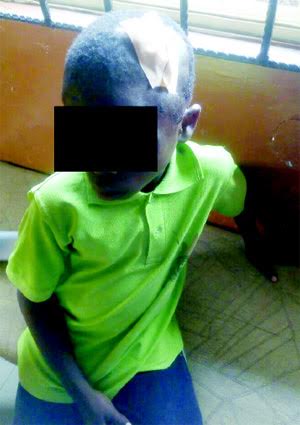 The 8-year-old orphan whose uncle drove 3-inch-nail into his head (read here) has been discharged from the hospital against medical advice while the case against his uncle was allegedly dismissed by police.

Vanguard reports that representatives of Lagos Child Protection Network, visited Sagamu Road Police Division, Ikorodu, where the suspect, Mr. Friday Paul, was being detained and they were informed that the Divisional Police Officer, DPO, has dismissed the matter, claiming that accusations against the suspect were fictitious and he had no case to answer.

The whereabout of the suspect, who was discharged by police, is currently unknown. His home at 6, Anjolarin Street, Odogunyan, Ikorodu was locked, indicating that he had relocated.

There are allegations that the IPO speaks the same dialect as the suspect and this is probably the reason for the special treatment. A senior police officer, who pleaded anonymity, informed Vanguard of this and said his colleagues may have been compromised. It was also gathered from the source that some police officers went to the suspect’s neighbourhood and warned neighbours and sympathisers to stop divulging information to the media.  Residents, who spoke on the condition of anonymity, said the female Investigative Police Officer, IPO, visited the neighbourhood to warn them to stay out of the matter or have themselves to blame.

The staff at Saviour the Rock Hospital were also allegedly warned by the Police to desist from talking to the media or risk persecution.  The senior police officer further disclosed that the  IPO and the suspect’s senior uncle visited the hospital over the weekend to withdraw all the exhibits from the hospital, after which the boy was discharged against medical advice. He said the suspect has now relocated to an unknown place.

The source said: “We have enough evidence to prosecute the suspect for child abuse, assault and attempted murder, but our Oga (DPO) and IPO are shielding him for reasons best known to them. There are many exhibits relating to the crime: belt, nail, X-ray film, radiological report, GP’s report from General Hospital, Ikorodu, and referral letter showing nail in the head. “Also, there are pictures of the injury site before and after the surgery and pictures of the previous scars on the face, forehead and legs. But for reasons best known to the DPO, the suspect was discharged and acquitted over the weekend.”