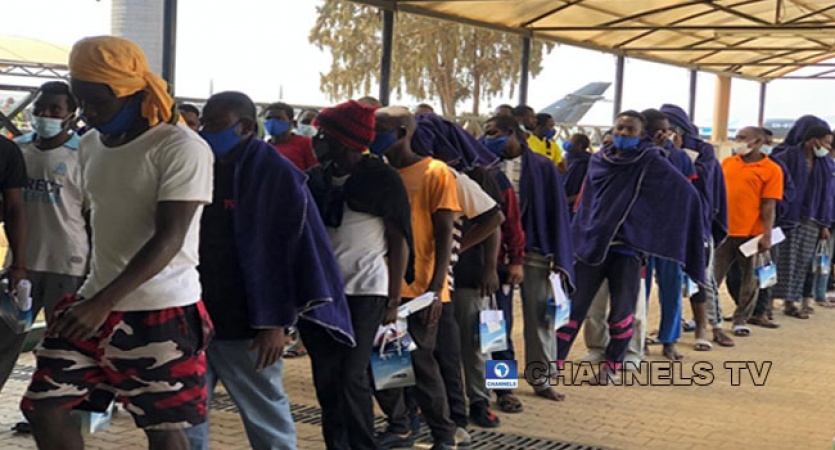 The returnees arrived via Air flight B773 at about 1:10 pm local time and were received by officials including those of Nigerians In Diaspora Commission (NIDCOM).

A representative of the minister of Foreign Affairs, Ambassador Bolaji received the returnees at the Hajj Terminal where he charged them not to despair.

He however said the Nigerian government does not support illegal migration.

The evacuation of the stranded Nigerians follows a call for help my them in a video that went viral recently on social media.

The videos showed bodies – wrapped in black polythene bags – lying on the floor in a packed room with a voice narrating that they have been stranded for more than seven months.

The Chairman of NIDCOM, Abike Dabiri-Erewa while responding to the viral video depicting Nigerians pleading to be returned from Saudi Arabia assured that they will be evacuated from the Muslim country by January 28th and 29th.

She attributed the delay to the coronavirus pandemic as both countries bickered over the responsibility of paying for COVID-19 tests.

“I can’t confirm the video. But I know that we have 600 Nigerians that are illegal migrants, that would be leaving Saudi Arabia.

“Yesterday we were with the Minister of State for Foreign Affairs, Ambassador Zubairu Dada, and other officials and plans have already been made to get them home before the end of the month pending any unforeseen circumstances,” the NIDCOM boss said. (Channels TV)