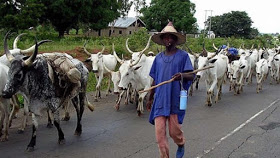 20 year old herdsman, Isa Alhassan has been arrested by officers of the Nasararwa State Command of the Nigeria Security and Civil Defense Corps (NSCDC) for allegedly stabbing a farmer, Nasiru Mohammed, to death in Kokona Local Government Area of the state on June 1st.

According to the NSCDC state commandant Lawan Bashir-Kano, the attack happened after Isa and his cattles strayed into the deceased’s farm at Anguwan Arimi I Bassa village of the state. An altercation ensued and the suspect out of anger, stabbed the victim until he died. Isa has since been arrested and will be handed over to the police soon. ?The deceased has since been buried.