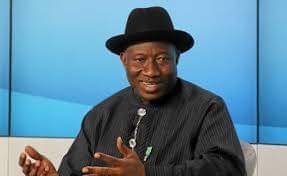 Supporters of former President Goodluck Johnathan, under the aegis of Citizens Network for Peace and Development in Nigeria (CNPDN), revealed in Abuja on Monday that arrangements were being perfected for the formal defection of the Bayelsa-born former leader to the ruling All Progressives Congress (APC).

Leaders of the CNPDN, stated this while addressing journalists in Abuja.
They assured Nigerians that Jonathan will definitely run for the 2023 general election.
Speaking on their behalf, the convener, Okeke Raphael, said the APC may not win the 2023 general election if it refuses to field Jonathan.
Raphael said: “Jonathan is going to contest and win if APC gives its ticket to him. Jonathan and President Muhammadu Buhari have worked together closely. That’s something good for Nigeria. Jonathan has been the biggest promoter of Buhari’s foreign policy.

“If APC gives its ticket to Jonathan, every Nigerian will vote for him. He’s the only nationalist among all the contestants and that will work well for APC
“Going critically through the list of presidential aspirants from the two major political parties, we are convinced that all other candidates are regional champions.
“However, President Goodluck Ebele Jonathan reflects national acceptance that will give impetus to APC’s victory in 2023 elections.
“As vanguards for Nigeria’s development, peace and unity, we want to reiterate that, our beloved country cannot afford to have a regional champion as a flagbearer.”
“We call on the National Working Committee of the APC with a loud voice to ensure that Jonathan is provided with a level playing ground to contest the 2023 general election.
“We want to remind party that, its ultimate responsibility is to ensure that the party fills the best candidate that can win the election.
“The party needs asset rather than a liability. Jonathan’s political credentials will increase the chance of APC winning the presidential elections in 2023.
“He is a man who is not a regional champion. A man who is accepted and loved by an Igbo in Enugu, Yoruba from Ekiti and same way by a Fulani man in Adamawa. A man who needs no introduction. A man who has his foot print across the country.
“A broad-minded man who has the capacity, integrity, experience, who is tested and trusted. More importantly, someone who passionately has the Nigeria project at heart.

Ayo Adebanjo: If based on merit, only South- East will Produce Presidents