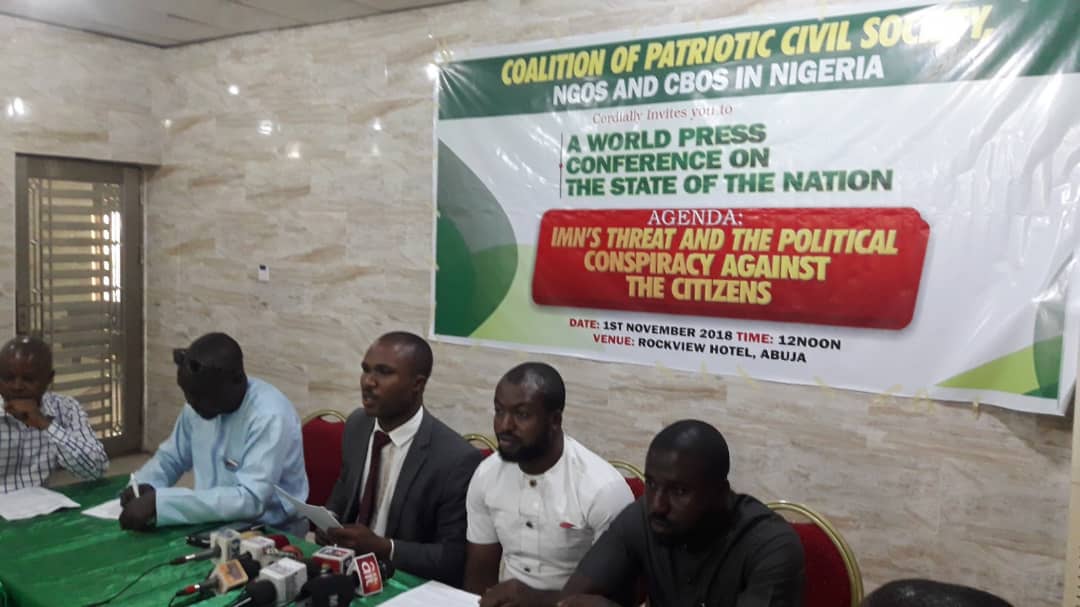 As preparations heat up ahead of the 2019 general elections, Nigerians have been warned to be wary of candidates who would draw the nation back to dark age.

The New Initiative For Credible Leadership (NICreL), which gave the warning, said having carefully analysed those gunning for the office of the president, it observed that most of the aspirants were chasing personal interest.

The group said from its findings and observations, President Muhammadu Buhari of the All Progressives Congress, APC, remains the best option to pilot the affairs of the entity called Nigeria for another four years after his first tenure in 2019.

Reverend Samson Onwu, Executive Director of group, why addressing the press on Thursday, noted that other presidential candidates such as Atiku Abubakar of the Peoples Democratic Party, Oby Ezekwesili, Donald Duke, were only chasing personal interest.

Onwu also cited some of the monumental achievements of the Buhari-led government to include; increase in foreign reserve, completion of abandons projects  as well improved security system.

The group’s director, therefore, urged Nigerians to support the Buhari/Osinbajo mandate so perfect the real change the country deserves.

The statement reads in full.

As the 2019 general elections draw near. Different personalities have indicated intent and readiness to contest the next presidential elections. This is very normal and healthy for any thriving democracy. A robust participation is one of the signs of a healthy democracy.

We at the New Initiative For Credible Leadership (NICreL) consider The forth coming elections as very important one for the country. Various individuals have emerged as flag bearers for the different parties- Atiku Abubakar for the People’s Democratic Party ( PDP), Oby Ezekwisili for the Allied Congress Party of Nigeria (ACPN), Donald Duke for the Social Democratic Party (SDP) and Muhammadu  Buhari for the All Progressives Congress (APC) and a number of other contestants.

Having appraised all the candidates and carefully analyzed their different abilities vis a vis their various stints at public office, we at the New Initiative for Credible Leadership have reached the conclusion that NONE of them is a better option than President Buhari, judging by antecedents, performance and character. To appreciate this view, it is important that we take a look at where we were as a nation in 2015 and where we are now; by this, we will undoubtedly appreciate the progress made so far in our evolution as a nation.

We have heard a lot of propaganda here and there on the state of the nation and how that life was better under the PDP government than now. Nothing could be further from the truth than that statement.

By May 2015 23 states out of 36 states were owing several months of salary arrears. By May 2015 some federal government agencies owed up to two months in salaries. The insecurity in the country was so pronounced that it was basically the major issue in the presidential campaign of that year. 14 local governments about the size of Belgium were already under Boko Haram control with flags hoisted as their territory. Boko haram attacks were common occurrences, even as near as the federal Capital Abuja.

The foreign reserves dwindled tremendously. From a whopping $48b in 2007 to as low as $29b dollars in 2015. This is despite the fact that oil sold at unprecedented high prices, sometimes even as high as $147 per barrel yet there was no savings rather it was a depletion of the existing saving. That was the kind of economy and government that was handed over to the Buhari administration.

Abandoned projects littered everywhere, not surprising. You cannot be looting and be doing projects at the same time. You either use the money to work for the people or loot the money. We all know what the preferences of the PDP government was, they preferred the looting, and hence the several abandoned projects.

This is just but a few of the decay and rot handed over to the Buhari administration. The question is: what did they do with it? The answer? They got down to work immediately.

According to records from the Debt management office, the Buhari administration has extended more than 1.9trillion Naira to State governments to enable them meet their salary and pension obligations. The support came in the form of Budget support facility, Paris Club Refunds, Infrastructure Loans, Loan restructuring for facilities with commercial banks. All of these are unprecedented.

The trend under the former PDP government was to deny states their entitlements, owe them and in many instances short change them. President Buhari out of his compassion for workers insisted on this interventions not because he wanted to please some governors but because he was concerned about the plight of workers and pensioners. This singular Acton was one of the major things that got us out of a recession.

President Buhari approved the sum of 54 billion Naira to clear pension arrears from 2014 to date. This may look like little things but to the pensioner who has missed his pension for several months this is a huge intervention and there are millions of them across the country that benefited from this intervention.

Despite the sudden plunge in oil prices to as low as $26 per barrel at some point. The Buhari government has invested massively in infrastructure across the country like no other government before it. In the 2016 and 2017 budget alone the Federal government released a total of 2.7 trillion Naira for capital expenditure alone. This is unprecedented in the history of this country. This massive investment has made it possible for work to resume on several stalled projects across the country. Rail projects hitherto abandoned are now being completed in record time, power projects, and numerous road projects across the country.

Despite the low oil prices, The Buhari government has done excellently well with the nation’s resources. It has increased the savings of the country by doubling the external reserve in a very short time from a meager $29 billion in 2015 to over $47 billion. These are facts that can be checked.

The Buhari government has invested over 500b Naira on different Social intervention programs across the country, this is unprecedented in the history of the country. At the moment there are over 8.2m pupils being fed every school day? There are also about 500,000 graduates being paid 30,000 Naira every month. Over 1 million poorest of the poor receiving conditional cash transfer of 5,000 Naira monthly. Hundreds of thousands of traders getting soft loans of 10,000 Naira, plus so many numerous programs across the country. This is simply put a people’s government.

Insecurity has reduced drastically. Boko Haram no longer holds any territory in the country. Except for some pockets of soft target attacks the group is already too decimated to carry out large scale attacks as they use to do in the past. The military has been re invigorated for improved performance. Required equipment is now made available to the troops.

The anti-corruption war has witness unprecedented recoveries from those who looted the treasury. The whistle blower policy has helped expose and recovered looted funds. The implementation of the TSA system by the Buhari administration has helped greatly to reduce leakages in government revenue.

We would have preferred to ignore some of those showing up now to send us back to the biblical Egypt that we have left.  It is just a bit hard to forget so soon the role played by former vice President Atiku Abubakar in the selling off of our national assets to those who rather than turn them around as promised, plunder them and left them desolate. It is hard to ignore how he transmuted from a public servant to a studiously rich man.

You can accuse President Buhari of anything But not vested interest. The same cannot be said of Atiku Abubakar. We have moved far beyond that stage now. Haven enjoyed a President that will always put the interest of the people first. It will not make any sense to now return those who used every opportunity they had to serve the people as an avenue to enrich themselves.

Madam Oby EZekwisili, though quite energetic, can also be calamitous in her approach to issues. We won’t forget so soon how her policy summersaults as Minister of Education then almost bastardized the Unity School system in the country. Her short temper and rigid view of issues, may just not be the best for a country with so much diversity.

All said and done we cannot see any good reason why a working formula will be dropped for one that is known to be ineffective. The Buhari administration in the last three years has done far more than some people did in 16 years with far less than they had to play around with then

It is obvious that amongst those genuinely against the reelection of President Buhari are also looters who have been denied access to the treasury plus those who benefited from the past plunder. We at the NICreL have however decided to go forward and not backward any more. Our support and vote goes to President Buhari in the 2019 election because of the tangible things we have seen.

Buhari Is Still The Alternative To Buhari – By Anthony Kolawole