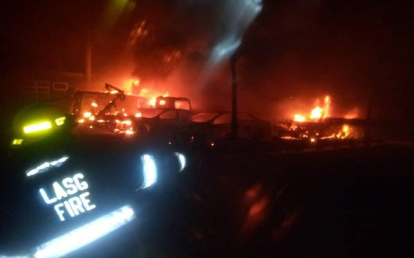 Many persons on Thursday night sustained varying injuries while properties, including vehicles destroyed after a gas tanker exploded along Mobolaji Bank Anthony Way, Ikeja in Lagos.

It was gathered the tanker exploded around 10:32pm on Thursday as a result of unconfirmed leakage while on motion inward Ikeja.

According to eyewitnesses, the impact of the explosion was felt inside buildings in the government residential area (GRA) axis of Ikeja.

As of the time of this report, it wasn’t clear what caused the tanker to explode.

The explosion is said to have occurred around Sheraton Hotel area, located on the Mobolaji Bank Anthony way in Ikeja.

He said the explosion was alleged to have been caused by leakage while the liquefied petroleum gas (LPG) tanker was in motion.

“The resulting fire travelled with the wind to the premises of Ogun State Property Investment Company (OPIC) Plaza besides Sheraton Hotels, which houses different commercial outfits including a Chinese Restaurant,” he said.

“The initial search and rescue activities revealed that 13 persons sustained various degrees of burns. Out of this, nine are males while four are females.”

He said four of the victims with severe injuries were later transferred to the trauma and burns centre at Gbagada General Hospital.

“Comprehensive post-disaster assessment on the extent of general damages would be done later today,” Farinloye added.

The incident comes weeks after a fire razed the fabric section of Cairo market in Oshodi, Lagos.

While goods worth millions of naira were destroyed in the market fire, no loss of life was recorded.

Nigeria’s Unity And All The Iberiberism By Femi Adeshina