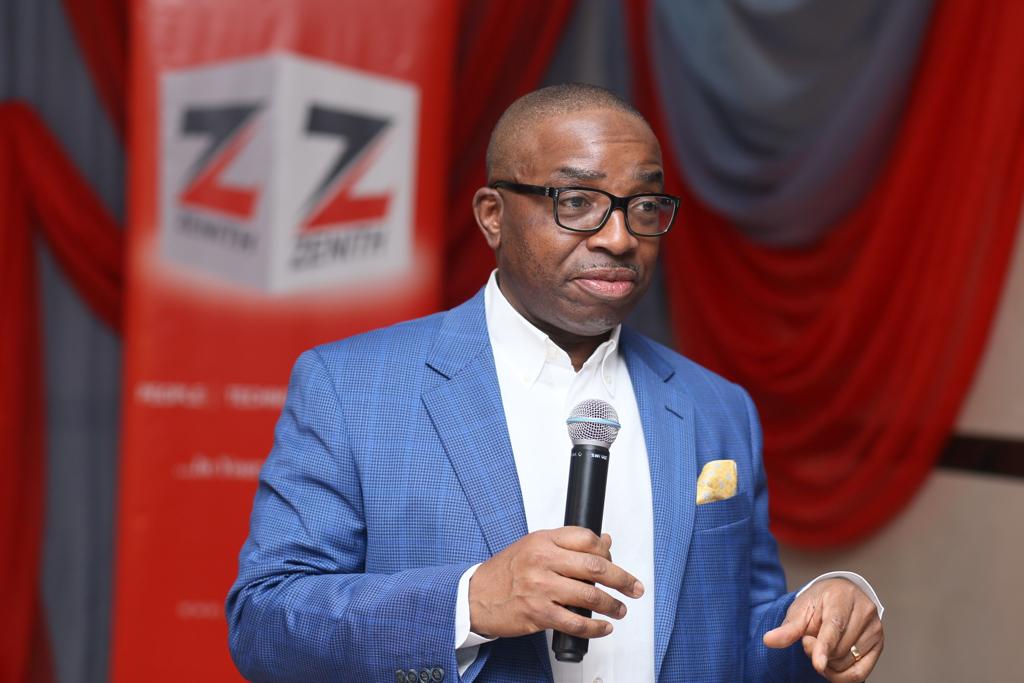 The Group Managing Director/Chief Executive of Zenith Bank, Mr. Ebenezer Onyeagwu, has called for increased impact investing in Africa for the continent to attain its full potential. He made the call during his keynote address at the Africa Investment Risk & Compliance Summit 2021 organised by the Emerging Business Intelligence & Innovation (EBII) Group which held at the prestigious University of Oxford, United Kingdom, on Friday, July 30, 2021. Mr Onyeagwu delivered his keynote address after the special keynote address by His Excellency, Nana Addo Dankwa Akufo-Addo, President of the Republic of Ghana & Commander-in-Chief of the Ghana Armed Forces, who was the Special Guest of Honour. Her Excellency Dr Amani ABOU-ZEID, The African Union Commissioner in charge of Infrastructure and Energy, also delivered a keynote address at the Summit.

Delivering the keynote address with the theme “Leveraging Impact Investment Opportunities for Growth in Africa”, Onyeagwu described impact investing as an investment that yields optimal returns for investors, value for all stakeholders, and guarantees continued sustenance and existence of humanity. He decried the shallowness of Africa’s financial market as depicted by the fact that no African exchange is among the Morgan Stanley developed markets index, only two African exchanges (Egypt and South Africa) are in the MSCI Emerging Markets Index, and just six African exchanges are in the MSCI Frontier Market Index. He noted that although the International Finance Corporation (IFC) estimates that the global investors’ appetite for impact investing could total as much as $26 trillion, only approximately 8% of the assets of impact intent funds are focused on Africa. According to him, this is not significant enough, and Africa appears to be in the room but not on the table, considering that Africa is in dire need of investment and the continent’s 1.3 billion people represent about 17% of the global population of about 7.8 billion.

Citing the immense opportunities in Africa that represent enormous investment proposition for discerning investors, including the huge population, large market and active labour force, and the rich natural endowment, Onyeagwu described Africa as “the new frontier” for global growth. He made a case for increased impact investment in Africa, noting that investment opportunities on the continent cut across agriculture, healthcare, housing, infrastructure, electricity, and the creative sectors.

Onyeagwu exuded immense optimism on the coming into effect of the African Continental Free Trade Area (AfCFTA) initiative, which would create a single, continent-wide market for goods and services, business and investment as being in one country on the continent grants investors access to the entire continent. He also called investors’ attention to Africa’s rich natural endowment, which includes 60% of the world’s uncultivated arable land and 9% of the world’s freshwater bodies, noting that Africa holds enormous potential for organic food production. He, therefore, implored investors in the agribusiness value chain to focus attention in Africa for organic food production instead of genetically modified food in other climes.

Onyeagwu also noted that as a socially responsible organisation, Zenith Bank continues to promote impact investment in Africa. For example, the bank has maintained strong advocacy for investment in Africa through its flagship sponsorship of “Inside Africa” on CNN for 16 consecutive years, which is helping to highlight the immense creativity and talent that abound on the continent and the enormous investment opportunities on the continent of Africa. He also said that the bank leverages its in-depth knowledge of the African market to guide investors and hedge their exposures. According to him, the bank has been on a steady Environment, Social and Governance (ESG) investment journey, which started with ESG integration as a business strategy as well as being a signatory to the Nigerian Principles for Sustainable Banking and the United Nations Environment Programme Finance Initiative (UNEP FI) Principles for Responsible Banking. For its efforts, Onyeagwu noted that Zenith Bank received recognition as the “Best Company in Promotion of Gender Equality and Women Empowerment in Africa” at the 2020 Sustainability, Enterprise and Responsibility Awards (SERAS).

In his call to action, Onyeagwu called for a paradigm shift, noting that Africa is a work in progress, and leaders in the public and private sector should not despair. He encouraged leaders to champion the changes they want to see, pay close attention to responsibility and accountability in leadership. He also called for the de-risking of Africa through reforms, improved ease of doing business, respect for the rule of law and sanctity of contract, and human capital development. Onyeagwu expressed satisfaction with the several reforms of the Federal Government of Nigeria, including the Road Infrastructure Tax Credit Scheme (RITC), the establishment of the Rural Electrification Agency’s (REA) Rural Electrification Fund (REF), Infraco Plc, and several other development finance initiatives of the Central Bank of Nigeria. He also noted that several African countries, including Ghana, Kenya and Rwanda, are recording massive improvements in the ease of doing business, leveraging digital technology to simplify government processes and deepen the financial system.

He implored Africans to see themselves as brothers and sisters, say no to xenophobia, and speak with one voice and not with discordant tunes. Onyeagwu implored the rest of the world to look at Africa as an investment destination that guarantees optimal returns. He noted that Africa has profound talent that abounds across the world and contributes to the development of these climes, and this should be reciprocated. He encouraged Africans to imbibe the spirit of UBUNTU – “I AM BECAUSE YOU ARE” since we are all connected in humanity.

Zenith Bank is Nigeria’s largest and one of Africa’s largest financial institutions by tier-1 capital, with shareholders’ funds in excess of NGN1.1 trillion ($2.64 billion) as at December 31, 2020. The bank is a clear leader in the Nigerian financial space, with several firsts in the deployment of innovative products and solutions that ensure convenience, speed and safety of transactions.

The Emerging Business Intelligence & Innovation (EBII) Group is an independent specialist compliance and global risk management consultancy firm offering education and expert consulting services to entities in the West seeking opportunities for diversification and growth in emerging markets and Africa. The Group supports African entities and governments with their risk management and compliance requirements and delivers practical and genuine support to firms by providing a comprehensive and relevant assessment of risks, enabling them to successfully navigate their risks and ensure adherence to their compliance requirements.