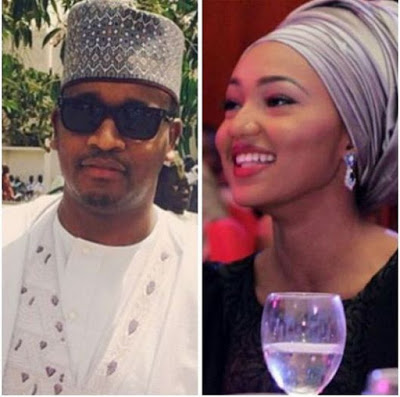 She has been described by many as the most deliciously sought after flower in the home of the first family. With an amazonian figure that sits well on her wafer-thin body, Zahra Buhari, the daughter of President Mohammadu Buhari has bewitched the high and mighty in the Country- very powerful men in government, salivating and falling over themselves to have her in their arms.
The list is endless, but we can confirm to you that Kaduna State Governor, Mallam Nasir El Rufai and Abdul Azeez Yari of Zamfara State have employed all the tactics in the books to seduce Zahra, but had been painfully unsuccessful. Both are still biting their fingers and confused.
Meanwhile another governor, who has been eyeing Zahra’s qualities of unusual delicacy is Alhaji Yahya Bello, the governor of Kogi State. We learnt Bello who already has three wives is hypnotized and enraptured by Zahra so much that he has been sending extravagant gifts to Aisha Buhari, Zahra’s mum. He wants her as his fourth wife.
But in her own wisdom, Zahra who is a graduate of microbiology from the University of Surrey in England decided to reject all these men of insatiable appetite for women for Ahmed Indimi, the son of Maiduguri (Borno State) based oil mogul, Alhaji Mohammed Indimi.
According to reliable sources, Zahra has already agreed to tie the nuptial knot with Ahmed Indimi and a hush-hush wedding ceremony has even been fixed and will take place at the presidential villa on Friday, 2nd of December 2016.
Apart from saving Zahra from the fangs of these governors and powerful men who only want to suck her nectar by her parents, she was reportedly rushed into the impending marriage by the Indimis for political and economic reasons.
“If you don’t know, Mohammed Indimi’s Oriental Energy Resources has been battling to survive since the price of crude began to fall. The billionaire has been losing money and most of his investments are on the fringe of bankruptcy. Most of his company’s exploration activities at Ebok Field was suspended some months back and his foreign partners vowed not to inject a dime into the business anymore until they are sure of recovering their investment “, the source said.
On the other hand, Ahmed Indinni, who Zahra will be married to in the next few days, source said is deeply involved in the destruction of the family business where he sits as the Head of Crude Marketing alongside his other siblings. The Indimi children are said to be extraordinarily flamboyant and wasteful. It would be recalled that on august 15 2013, Ahmed munched his bank account balance and posted it on Instagram-the account balance then was $99,864,731 (Ninety nine million, eight hundred and sixty four thousand seven hundred and thirty one dollars).
The source said getting Zahra into the Indimi family is seen as hitting a jackpot by the family and members of the family have been popping Champagne and celebrating since the news of the wedding plans was announced.