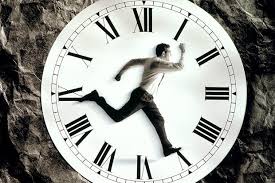 Over years, human behavior towards time can be viewed as universal: i.e everyone sees time as a collective process rather than an individual effort.

The physical time can be universal i.e everyone can use the time as a measurement of an event that is to take place.

The time I refer to as “Life time” is different, because God as allocated to each man an appointed time. Every man has his own time different from the other man to manifest. That is why some children are given birth to and they don’t walk or talk at the time perceived by their parents to be the right time but along the way, those kids begin to walk or talk.

This is a very wrong illusion portrayed by the future leaders of tomorrow. This belief has taken a deep root in the minds of the youths that so many youth have been driven to engage in social vices and become a menace to the society in the name of getting rich. Understand that your “life time” is different from any other person. You and your brother can’t even share the same life time, that’s why we have cases of younger brothers being successful ahead of the senior one.

Learn to slow down, learn to move at your own pace, Don’t let another’s timing dictate your time.

One thing I have learnt about life is, there is no late comer at the podium of success. You could become rich or successful when you are fifty, you could get married at 45, you could buy your dream car or house at age sixty, The point here is you made it.

It took to 32 years before J.K Rowlings could publish Harry Porter after being rejected by 12 publishers, popular actor morgan freeman got his big break at 52, steve carrel only got his break at age 40 and so much more.

Tomorrow sometimes is never too late, patience is a virtue. Don’t let the time frame Created by your environment or society dictate your life. You don’t have to be great to start, but you have to start to be great.

The person on the path to success must first contend with many baby steps. Being successful takes a gradual process, Leonardo Da Vinci said “he who wants to be rich in a day, will be hanged in a year”.

Slow and steady eventually wins the race, for even the holy bible says ” the race is not for the strong, the swift, nor the battle to the strong, neither yet bread to the wise, nor yet riches to men of understanding, nor yet favour to men of skill; but time and chance happeneth to them all” Ecclesiastes 9:11.

KPEROGI: When Coming To Equity, First Clean Your Hands, By Maiwada Dammallam

An Open Letter To The Nigerian Youth by Oparinde Timileyin