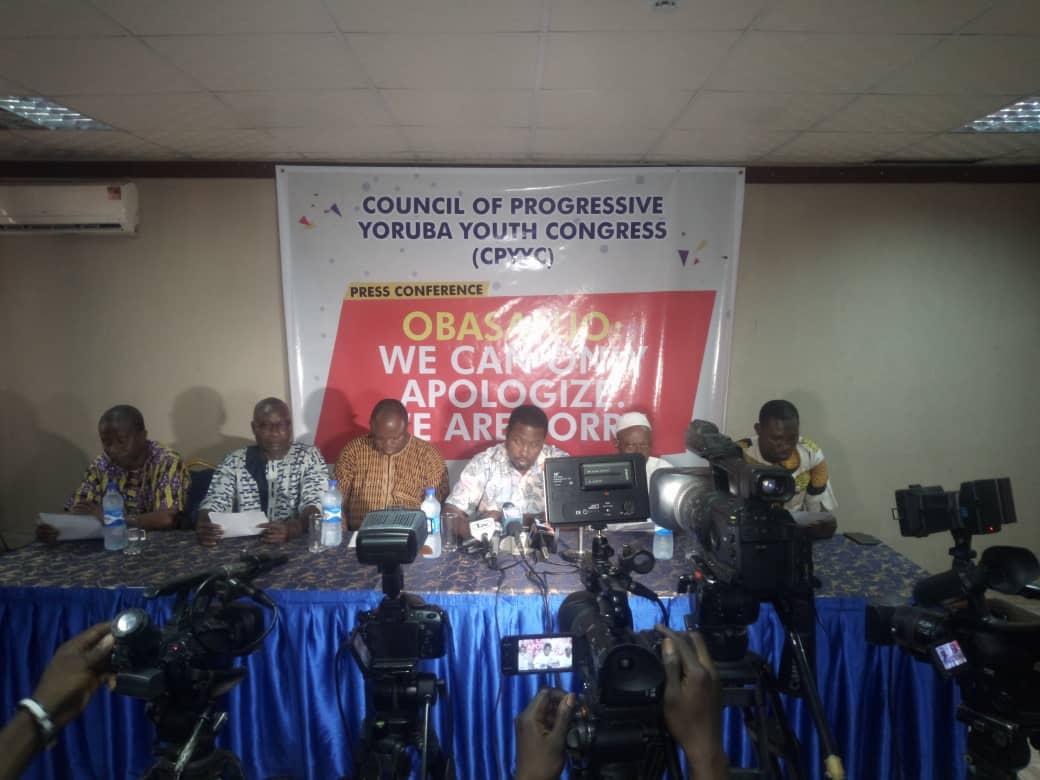 As reactions continue to trail the recent statement by former President Olusegun Obasanjo on the state of the nation, the Council of Progressive Yoruba Youths has apologized to Nigerians.

The youth group said the latest missive in circulation entitled “Points For Concern And Action by Chief Olusegun Obasanjo” was off-point and should be discarded in its entirety.

Speaking at a news conference in Lagos on Tuesday, the National President of the group, Kola Salawu, said Nigerians needed to forgive Obasanjo for the eight years he wasted as a civilian president and for the wrong path he set the nation on.

Salawu said the Yoruba race was deeply ashamed that a so called elder from its ethnic stock decided to remain in a muddy gutter by penning such nauseating content.

He lamented that Obasanjo sowed the seed for extremism that birthed terrorism. He backed this up by ensuring that the military was emasculated and unable to respond to the threat he has created.

The youth leader said, “In Yoruba land, we take pride in answering our names. Only a bastard will deny his name. In practical terms this translates into us standing by our decisions and actions, irrespective of what outcomes they produced. Where the outcomes are good our head swell with the accompanying accolades; where the results of our actions are undesirable, we accept responsibility with honour and explore how to make amends so that we remain an integral part of the society. Of course, in the ancient past, where the failing is too grievous and involves a king that remained recalcitrant the relevant powers will have to present hi, with an empty calabash.

“This is a level of honour Obasanjo has never possessed and is incapable of learning. Had he such honour he would have accepted that the current insecurity he ranted is the outcome of his misrule that is only now yielding fruits. The poverty that makes it possible for terrorists, militants and separatists to gain new recruits was first instituted under his watch as president. The extremism that the nation today grapple with first surfaced under him with some states declaring Sharia rule, which was the incentive that made terrorists started demanding nationwide strict implementation Sharia.

“In the entire eight years he held office, Obasanjo was in mortal fear of being overthrown because of the unpopularity of his government. His solution to this was to destroy the military in the belief that there would be no way to plot a coup against him if there is no virile military. In addition to embarking on massive sacks and purge that deprived the military establishment of crucial institutional memory, he also ensured that the military inventory was depleted without replenishment or procurement to make sure that the military was incapacitated.

“The destruction of the military armory at Ikeja Cantonment about this time of the year in 2002 has now been confirmed to be part of Obasanjo’s desperation to de-tooth the military. A military plane crash that killed a dozen generals under Obasanjo’s watch in 2006 is equally put down to part of his obsession to gelatinize the military. He seemed to have succeeded with it.

“The taint on the military from Obasanjo’s directives for troops to disregard rules of engagement in Odi and Zak-Ibiam remains an obstacle to the military. Even when their recent and ongoing operations meet the global standards for the rules of engagement, the stain from the Obasanjo years remains a perspective from which the military is perceived. This affects the ability of the military to procure arms when they need it and the same tyrant under whose watch this happened is today playing the saint.

“In essence, Obasanjo sowed the seed for extremism that birthed terrorism. He backed this up by ensuring that the military was emasculated and unable to respond to the threat he has created. What has saved Nigeria from Obasanjo’s evil intent was the timely turnaround being witnessed under President Buhari, who has high regards for institutional memory in the military.

“The whole of Nigeria became his enemy and he has never lost on any perceived opportunity to exact vengeance on all citizens. May we refresh our memory that Obasanjo reportedly trained 1000 killer snipers abroad with the intention of using them to assassinate those who stand in the way of his ambition. These snipers formed part of the pioneer team of killers that have remained loose in the country till date.

“The outcome of that election produced Mallam Umaru Yar’Adua as president and it was a matter of months before Obasanjo started wishing him dead because he turned out not to be the stooge that Obasanjo expected. Yar’Adua’s demise paved way for Goodluck Jonathan, whom Obasanjo did much to mislead and abandoned after he incurred the anger of Nigerians pleasing the former President. If Obasanjo thought he would have a pliant President Buhari following his opposition of Jonathan he was in for a rude shock.

“If Obasanjo supported Yar’Adua and later disowned him over ill health, supported Jonathan and later disowned him for consulting others and supported Buhari and now disowning him for not bending to his wishes, then maybe it is not these president that something is wrong with. The problem is Obasanjo. He feigns support for successive presidents in the hope of being able to use them as puppets and continue as a life president while they act as the symbolic leaders. Such deviousness is not the Yoruba way because it is without honour.

“We do not want to go into the past of an Atiku Abubakar of the People’s Democratic Party (PDP), whom Obasanjo convinced Nigerians to be a very corrupt person. The same person God will not forgive him for forgiving. He has turned around to tell Nigerians that this is the same person to vote in the hope of acquiring a new puppet. A Yoruba elder will not be caught doing such, it amounts to being incitement, which is unbecoming of anyone that has become a grandfather.

“We apologize for the eight wasted years of Obasanjo as a civilian president and for the wrong path he set the country on, which we are now all trying to correct. We apologize for his callous thinking that had projected that Buhari would die in office. We apologize for the unbecoming tantrum he has been throwing for not having his way as a puppet master of successive presidents. We apologize to you all Nigerians because what Obasanjo is does not reflect who the Yoruba are.”