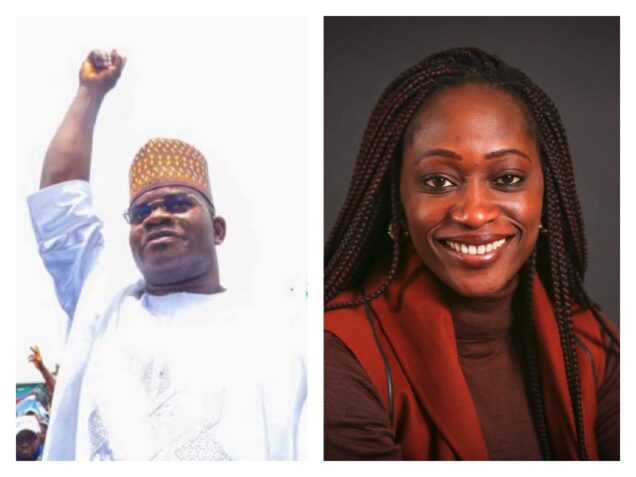 The Director-General, DG, of the Yahaya Bello Presidential Campaign Organisation, Hafsat Abiola, has said she is leading the campaign efforts of Governor Yahaya Bello because she has studied the aspirant and has seen in him the qualities needed to take Nigeria to its right destination.

Hafsat Abiola, daughter of the winner of the 1993 presidential election, late MKO Abiola, said one of the similarities between her late philanthropist father and the Governor of Kogi State, Yahaya Bello, was that they both refused to have political godfathers.

This, she said, was responsible for the persecution the Governor had faced by different interests and the controversies around his administration.

The DG, who spoke on Arise TV’s This Day Live on Sunday, expressed the confidence that Bello would clinch the ticket of the All Progressives Congress irrespective of the zone of the National Chairman.

Nigerians must be given the free hand to choose their leaders. That is the meaning of democracy. My father did not contest to represent zoning interest. His interest was Nigeria and Nigeria alone,” she said.

She added that another similarity was that the late MKO believed in a United Nigeria, just like Bello, noting that he also treated everyone around him with respect regardless of their social standing.

These are the same qualities I have seen in Governor Bello. He dared to contest, not minding that he was from a minority tribe in Kogi and won, and he has come out again. My father did the same, when it was believed that a Yoruba man could not be President.

“Yahaya Bello is the best man for the job. And you know me, I’m not driven by pecuniary considerations. I do what I believe in. In the next seven weeks, we would be working hard, and when we emerge, we will deliver a Nigeria of our dreams,” Hafsat Abiola said.

She said her father would have been happy to see that a young, courageous man like the Governor had done everything to bring back his Hope ’93 in Hope ’23, with the same person that did the manifesto on board – Senator Jonathan Zwingina.

Thousands of Nigerians from all walks of life had stormed the Eagle Square at the nation’s capital on Saturday to witness the official acceptance of Governor Yahaya Bello to vie for the 2023 Presidency.

While declaring his intention to run, Governor Bello reiterated that he had demonstrated capacity to lead Nigeria in his present assignment as the Governor of Kogi State, noting that, for him, all that mattered was Nigeria and the wellbeing of citizens.

The DG pointed out that the presidential aspirant had the right marks where the votes were – women and youths – adding that being the first female Director-General of a presidential campaign organisation was an attestation to Governor Bello’s unrivalled record in women inclusion.